Three quarters of a million young people in Britain believe they have nothing to live for, according to a recent report from the Princes Trust.

The findings showed that 40% of young people have faced symptoms of mental illness, including self-loathing and panic attacks, as a direct result of being out of work. The survey also found that long-term unemployed young people across the UK are more than twice as likely as their peers to have been prescribed anti-depressants. One in three long-term unemployed youngsters have contemplated suicide and one in four (24%) in this group admitted to self-harming, according to the charity’s report.

Options just keep narrowing for young people and while austerity is having a devastating effect on the working class as a whole, young people have suffered attacks on a huge scale with almost one in four young people not in education, training or employment. This means we are leaving school with little hope and heading straight to the dole queue. While the Assembly parties were campaigning for huge tax cuts to big business, they scrapped the £10 and £20 band of young people receiving EMA meaning that 4,500 would lose out entirely. This will continue to drive young people, especially those from a disadvantaged background into the dead end of unemployment, making the figures found in this report almost inevitable.

Recent protests and debates in the media have shown that young people are fed up of the insecurity and limited rights of zero hours contracts. On a zero hours contract you can receive no hours whatsoever week after week, but still not be included in unemployment statistics, a huge convenience for the politicians! Students, workers and trade unions need to organise and fight for real opportunities for young people not workfare schemes, not zero hours contracts with little rights, not debt and not sectarian division! If you agree contact Socialist Youth today.

Dear friends, Youth Fight for Jobs & Education activist Sean Boyle has been removed from his position as…
byArchive 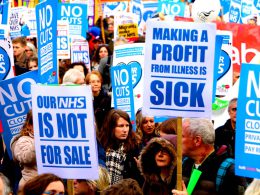 The NHS was created by the working-class movement and has always been defended by the working class. The only genuine way to celebrate its 70th birthday is to defend every service and roll back privatisation in a new mass movement for the best health care available in the 21stcentury.
bySocialist Party
Read More