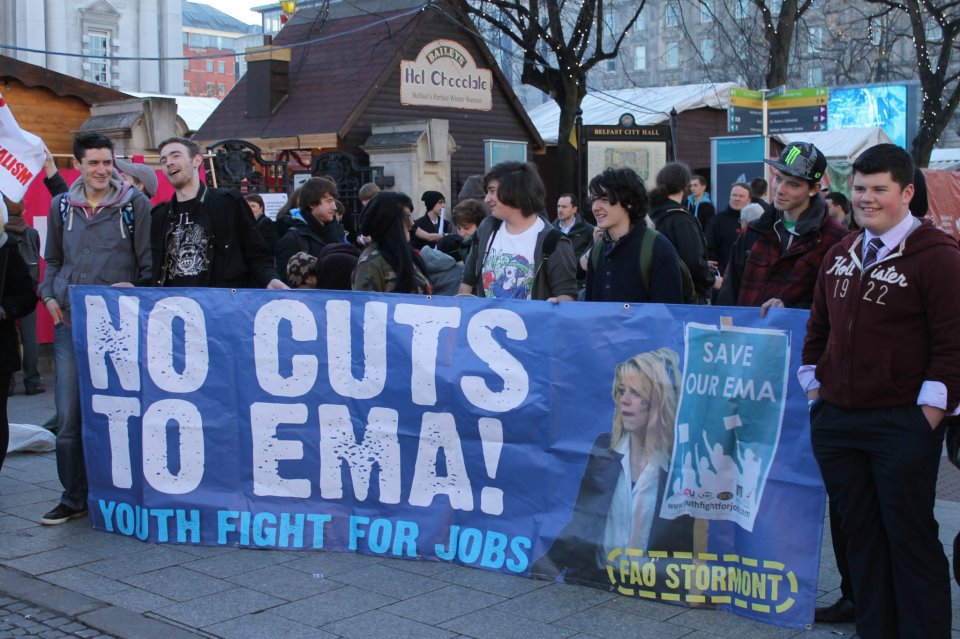 The cuts jointly proposed by Ministers Stephen Farry (Alliance Party) and John O’Dowd (Sinn Féin) today would see 4,000 young people lose the payment entirely. We can be sure that, if this cut is allowed to pass, the politicians will come back with more attacks in the near future. For many students, EMA is decisive in allowing them to remain in education. These cuts would drive more young people into the dole queues, when almost one in four 16-24 year-olds are already unemployed, thanks to the disastrous austerity policies of the Assembly Executive.
Once again, we see whose side the Stormont politicians are on. They plan to cut a small allowance for students – which, as it stands, costs a meagre £29 million – while they ring-fence over £10 billion to finance rip-off PFI privatisation schemes and campaign for huge tax cuts for big business. This is just part of their agenda of making ordinary people pay for the crisis created by the bankers and speculators.
It is disgraceful that Adrianne Peltz of NUS-USI has welcomed the cuts to EMA proposed by Minister Farry today. That is a betrayal of the interests of the very people she is meant to represent. The leadership of NUS-USI has prevented any discussion on the issue within the students’ movement. They met with Ministers Farry and O’Dowd and proposed alternative cuts to EMA without any mandate. We call on them to immediately withdraw their support for the cuts and instead join with us to build a fightback to defend EMA. Otherwise, they will be left behind.”
Youth Fight for Jobs & Education are organising meetings across Northern Ireland in Belfast, Enniskillen & Derry to bring students together and discuss how to resist these cuts. This is not the first time the Assembly politicians have moved to cut EMA. A campaign of protests and occupations which began in December 2010 and united Protestant and Catholic young people forced them to back down. If we stand together in determined opposition, we can do the same again!
Total
0
Shares
Share 0
Tweet 0
Pin it 0

Optimism at Davos based on reality?

Over the past few months the government's work experience scheme has come under increasing scrutiny. The scheme is nothing more than one attempting to introduce slave-labour for the young unemployed, with young people working 30 hours a week, for eight weeks, and receiving no additional pay on top of their Job Seekers Allowance (JSA), which they are threatened with losing if they do not participate.