It is not enough to be anti-capitalist, although that’s an important starting point. To win more people to fight against this system, we also need something to fight for. Socialism means an end to the private ownership of the industry, wealth and resources in society and a society run by working-class people, through public ownership and planning of the economy.

This would mean the genuine extending and deepening of democracy far beyond the limited version granted in ‘capitalist democracies’, never mind the capitalist dictatorships that exist throughout the world. At best, capitalist democracy means giving people a choice every three to five years to elect representatives who are largely unaccountable and heavily influenced by big business interests, which dominate the economies. In fact, the main decision making in our society is made not in Stormont or Westminster, but in the boardrooms of major corporations.

If you first come across the Socialist Party in this Assembly election, it is worth noting that we won’t disappear after the elections. We organise in workplaces, communities, schools and colleges, because real change comes through struggle from below. We seek to build a socialist-feminist challenge to gender-based violence and anti-racist resistance to the far right, we oppose imperialist wars and fight for the unity of the working class against sectarian division.

We use elections, and the potential public positions that flow from them, to popularise a socialist ideas and organise the power of workers and young people from below. In the South, Socialist Party TDs were at the forefront in building mass non-payment of the hated water charges between 2014 and 2016. Our TD Ruth Coppinger, alongside Socialist Party members in ROSA, helped win the right to choose, by defiantly organising actions around the use of the abortion pill. In 2020, Ruth and Mick Barry TD helped assist striking Debenhams workers to fight against the bosses that had sacked them, in the face of inaction from their union leaders.

3. Reforms are not enough

The Socialist Party fights for every real improvement in the lives of working-class people, e.g. a rise in wages or investment in public housing, or the repeal of discriminatory laws against LGBTQ people, women, migrants and people of colour.

But how do we fund the necessary reforms under a system in which wealth is hoarded by a tiny minority and private profit is prioritised over public need? And how can we end discrimination and prejudice under a system that thrives on oppression and division?

The fact is that the fight for real improvements in our lives is intimately bound up with a struggle for broader revolutionary change, as even gains we make can be clawed back. Capitalism is built on inequality and injustice, and so to really end these the system itself must be ended.

Take climate change – a graphic example of why we need a break with the current system. Between 2015 and 2019, the 60 largest banks invested $3.8 trillion in fossil fuel companies, while investment in renewables fell! To end this insanity, the resources of these banks and these companies must be seized before more harm is done, and we can plan just transition to a zero carbon economy.

4. We need an global struggle and alternative

Capitalism is global and so must be the struggle against it. Joining the Socialist Party means joining not just a local or national organisation, but an international one. We are part of the International Socialist Alternative (ISA), an worldwide organisation with a presence on every continent.

It involves socialists in Israel/Palestine that actively oppose the occupation of Palestinian land and the oppression of its people, and socialists in Russia who are building the movement against Putin’s murderous war. We organise in the United States, where our organisation, Socialist Alternative, helped win real victories for working-class people in Seattle, including being the first city to win a $15 an hour minimum wage.

5. “We aren’t outnumbered, we are out organised”

Socialists have confidence in the power and capacity of working-class people to overthrow our rulers and take on the running of society. But the capitalist class have plenty of weapons at their disposal, from the state to the media, to prevent such revolutionary change. However, as Malcolm X put it “we aren’t outnumbered, we are out organised.”

In the last few years, we witnessed inspiring revolutionary movements from Ecuador to Myanmar. What was lacking was a revolutionary organisation to bring these movements to their logical conclusion: to take power from the capitalist class and put it in the hands of working people.  As the African proverb goes, “tomorrow belongs to those who prepare today.” The work of the Socialist Party is about organising those who want to fight for workers’ unity and socialist change. We do so by being involved in the struggles of workers and young people and boldly arguing and organising for socialist change.

By getting involved you can make a difference! Join up today!

Socialism 101: Is it possible to change the world, or is socialism a utopian dream?

By Eddie McCabe “We live in capitalism. Its power seems inescapable. So did the divine right of kings.” –…
bySocialist Party
24 shares
24
0
0 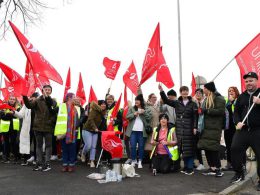 “SPRINGTIME OF DISCONTENT” was the headline carried by the Belfast Newsletter on 1 April 2022. An apt description…
bySocialist Party

Forecasts of a midterm “red wave” for the Republican Party failed to land on Tuesday, and instead a…
bySocialist Party

The Socialist Party sends solidarity to the 1,200 Wrightbus workers faced with redundancy since the firm went into…
bySocialist Party