Since the centenary of the Great Dublin Lockout has been preoccupying us in 2013, it would be remiss not to mark also the 220th anniversary of a dramatic movement of resistance to tyranny that took place in West Kerry.
In June 1793 fourteen protestors were massacred by the English military in Dingle town under the command of a member of the local landed gentry. In Irish the episode is known as ‘Lá Maraithe na bhFear’ which translates into ‘the day of the men’s killing’ even though an innocent woman also lost her life.
Although many of the details of this tragic day have been lost in the shrouds of time, the causes that gave rise to it are eerily echoed in some of the big economic and social issues of our own day such as the heavy burden of austerity taxes to pay for the upkeep of institutions of the establishment for which the Irish people have no responsibility.

Forcing local people to join a militia established earlier in 1793 became an issue of major contention throughout Ireland. This was to supplement the regular army whose numbers were depleted by the transfer of soldiers to fight in Britain’s war against revolutionary France.70_small_1247576597

In May and June 1793 there was much agitation around Dingle with riots taking place on May 27 and June 16. However contemporary observers blame this on deep sources of discontent alongside the militia question.

Mr Cooke, Government Under Secretary at Dublin Castle declared, ‘Militia may be the pretext but something deeper is at the bottom’ and elaborated in another letter, ‘In Kerry a mob which broke into violence in Dingle used the militia as a pretext but declared also against tithes and taxes.’ The Editor of the Freeman’s Journal was certain that contagion from the French Revolution of 1789 was also a factor with its democratic ideals appealing to an oppressed and hard pressed Irish peasantry. He declared, ‘The Freeman’s Journal will not allow that the militia project was the cause, certainly not the only cause, of the outrages. . . this is all a farce – these mobs are heard to cry out liberty and equality.’

Tithes – the mandatory payment of one tenth of the value of agricultural products for the upkeep of the Church of Ireland – naturally chafed with tenant farmers who had no allegiance to this church. Today, working people, pensioners and the poor in this part of Ireland can certainly identify with this as they are equally burdened with the rescue and maintenance of financial institutions to which they have no obligation and no affinity.

Add to the tithes the demands made by rack renting landlords and we can well understand why our forebears in the Dingle peninsula and in many other corners of this country ‘carried their violence to a pitch of daring licentiousness, hitherto unexampled in this county’ as described by Faulkner’s Dublin Journal on 22 June 1793. It describes how, ‘A vast multitude of these frantic wretches assembled in the town of Dingle’, attacked the houses of establishment figures and ‘burned all the tithe notes and papers they could get.’

The people’s discontent came to a climax on Monday, June 24th when four thousand or more people including many from the Whiteboys rural resistance movement, gathered from the peninsula into Dingle town. The local establishment had secured the services of a detachment of the British army which now faced the protesters. Stones were thrown and then John Griffin, a man from my own native parish of Lispole, according to a later account, ‘had an old fowling piece loaded with powder and ball and took a deliberate aim at the commanding officer.’ The shot missed its target but it was the signal for the soldiers to start a killing spree.

The protestors scattered in different directions. It is said that John Griffin fled after firing the shot but was pursued and bayoneted to death. Thirteen others were killed including a Mrs Gloster who was apparently shot while looking out from a doorway at the dramatic events taking place. Five of the other men killed, whose names we know, came from west of Dingle in what we would now refer to as the Gaeltacht.

Events like this were woven into the history of Ireland over centuries of economic and political oppression. Most would be forgotten were it not for the dedicated voluntary work of local historians who rely on community memory while also digging out contemporary sources of information. For the fascinating story of ‘Lá maraithte na bhFear’ I am indebted to former Dingle schoolteacher, Pat Neligan, who, building on the work of other local historians gave a compelling lecture on this event at The Blasket Island Centre some time ago. The spirit of 1793 Dingle and Dublin 1913 move us still. It is a spirit we must revive. 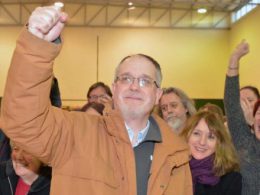 Time to gather forces for a real workers’ alternative is now By Peter Taaffe, from Socialism Today (November…
byArchive
1 share
1
0
0