New book entitled ‘Let us Rise!’ on the 1913 Dublin Lockout including essay on role of women, the solidarity effort in Britain, the revolutionary aftershock and a response by Joe Higgins TD to Jack O’Connor’s Larkin graveside speech.

Commenting on the imminent launch of Let us Rise! which will be available from all good bookshops from next week Joe Higgins TD said:

“This book commemorates the immortal 1913 Dublin Lockout. This struggle, with brilliant leaders like Jim Larkin and James Connolly, heralded the emergence of the working class as the key social and political force. It ushered in a decade of struggle which could have changed the course of Irish history.

“This period is rich in lessons for working class people today. The struggle waged in 1913 is a beacon that can shine a bright light on the way forward, if its lessons are fully absorbed.”

Contributor and co-editor of the collection of essays Cillian Gillespie added:

“Rather than a simple retelling of the story of the Lockout this book has been produced by the Socialist Party with a number of particular focuses in mind including the role of women in the strike, the solidarity effort in Britain and the period after the Lockout which say a rapid recovery of the workers movement and a revolutionary tide across the country which receives scant acknowledgement by official Ireland.

“Finally there is the question of how the events of 1913 are interpreted today by the workers movement. We include a piece by Joe Higgins TD in response to Jack O’Connor’s speech at Jim Larkin’s graveside earlier this year where, without a hint of shame, he claimed that Larkin would have supported the current strategy of trade union leaders like himself today whose stewardship of the movement since the crisis began has been marked by one surrender after another, the complete antithesis of Larkinism.” 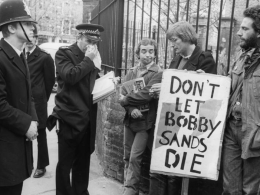 By Joe Higgins TD    Can an institution, like a human person, suffer from schizophrenia? Judging by the…
byArchive

By Lynn Walsh, Committee for a Workers International Plutocrats wield power and influence by virtue of their wealth.…
byArchive