Established during an international meeting of socialist women in 1910, International Women’s Day is an event celebrated every year on March 8th to commemorate those who have struggled for women’s rights and the gains made while also highlighting the gender inequality that still exists in society. Through struggle women have won certain freedoms such as the right to vote, receive an education and avail of limited maternity leave – but this is not enough. Sexism still remains an integral part of capitalist society. Issues such as domestic violence, the lack of reproductive rights, high levels of women in poverty and wage discrimination remain. This shows the struggle for real equality has only just begun.

VIOLENCE AGAINST WOMEN –ON THE STREETS AND AT HOME

Being a woman today is a dangerous life-sentence. With an average of two women murdered each week in the UK by a current or former partner and 1 in 4 women experiencing domestic abuse at some point in their lives, the fight for equality has never been more relevant. Sexual abuse against women is at alarming levels with a total of 400,000 reported cases each year in the UK alone.Street harassment continues to be a fact of life for women. In a 2014 survey, 65% of female respondents reported repeated street harassment. Verbal and physical abuse was also found to be disproportionately experienced by LGBT women and women of ethnic minorities.

Every year over a thousand women are forced to travel overseas from Northern Ireland to access vital abortion services due to the archaic and restrictive nature of the existing law here. The majority of people in NI support the liberalisation of abortion law. Yet this is not represented in Stormont where only two MLAs support abortion rights. Sinn Fein and the DUP continue to block a woman’s right to choose. Orange and Green political dinosaurs should not be allowed to control women’s lives. The 1967 Abortion Act must be extended to NI immediately as a step towards free, safe and legal access to abortion.

Women are among the hardest hit by the impending onslaught of Stormont cut-backs. 20,000 public sector workers are set to be made redundant over the next few years which will have a particularly damaging impact on women who constitute two thirds of the public sector workforce. Proposed cuts to benefits will also have a dramatic impact on the welfare of women in NI as benefits on average make up a fifth of women’s incomes as opposed to a tenth of men’s. Unequal opportunities in employment have resulted in a 16% lower average wage per hour for women across the EU. Inadequate childcare facilities lead to a 31% lower income for women with children who are often forced into part-time work. It is no surprise then that women make-up 70% of the world’s poorest inhabitants.

Women’s oppression as well as sexism are hugely beneficial to the capitalist system that relies on exploiting differences. Capitalism thrives as a result of this exploitation but it also makes real equality impossible if we don’t also change the underlying system.
The Socialist Party and Socialist Youth join the struggle for women’s rights with the struggle against capitalism. We are a working class party that unites Catholic and Protestant women and men to fight against against oppression and austerity and the sectarian parties in Stormont. We stand for a socialist alternative where the needs of people come before the profits of the super rich minority. 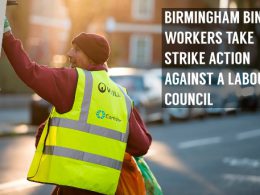 The dramatic surge in support for Labour in the general election pulled the rug from under Corbyn’s opponents within the party. By conceding on the demand for a more radical manifesto, they believed they had provided Corbyn enough to hang himself.
bySocialist Party

An article on the website of the “Republican Network for Unity” has attacked the Socialist Party. This short…
byArchive