The release of State Papers from 1980 has shed further light on British government policy during the course of the Troubles. The Socialist Party has always argued that the British state above all acted in its own interests -in the interests of capitalism – during this period. The Papers add to the evidence which supports this analysis. In 1979 the Thatcher government came to power. In the same year the Provisional IRA, reorganised into a cell structure after it suffered significant setbacks in the period after the 1974-1975 ceasefire, launched a new offensive.

By 1980 this offensive was already running out of steam. In 1980 and 1981 the two hunger strikes allowed the leadership of the Provisional’s to accidentally stumble onto the new strategy of “the armalite and ballot box”.

Thatcher provided Sinn Fein with this opportunity by taking a hardline stance over the hunger strikes and her regime was of course marked by vicious attacks on working class people. Her position on the North however was essentially pragmatic. Like British governments before and after it leant on the majority Protestant population to maintain stability. This meant that the Catholic population suffered repression, though periodic attempts were made to accommodate Catholics to the Northern state.

In early 1980 the SDLP, the Alliance Party and the DUP entered negotiations on power sharing convened by Secretary of State Humphrey Atkins. The talks were boycotted by the Official Unionists and Sinn Fein was excluded. After some months the talks collapsed without agreement. In the aftermath of the talks the Northern Ireland Office body the Central Secretariat drew up a list of “fall-back solutions”.

Amongst the options considered was a united Ireland:

“The Government could decide to have a fundamental look at the constitutional status of NI and perhaps to start moving in the direction of Irish Unity or some new relationship between GB and Ireland.”

“Such a policy would, of course, fly in the face of the approaches followed by successive British Governments and would in all probability provoke a violent unionist backlash. It is not, therefore, “a starter”.”

The significance of this is that the option of a united Ireland was on the table at all. The Republican leadership justified the IRA campaign on the basis that the British state wanted to hold onto Northern Ireland for its own interests and would only withdraw at the point of a gun. The sharp repression meted out by the British government appeared to support this view. The reality however was that the British government, even the right-wing Thatcher administration, was prepared to consider withdrawal but could not take even one step in this direction because of the danger of a Protestant backlash, civil war and re-partition. The IRA campaign did not weaken Britain’s resolve but made it even more difficult for it to consider the option of withdrawal.

Thirty years later there is apparent “agreement” at Stormont. There is no real agreement however and the problems working people face are as acute as ever. Today, as in 1980, the only solution is unity, the unity of working class people in Northern Ireland, the unity of the working class on the island of Ireland , and unity with the working class of Scotland, Wales and England, in a common struggle against the cuts and for a socialist future.

An estimated 75% of public sector workers took part, rising to 90% amongst bigger concentrations of workers in the state sector. Two demonstrations by trade unionists and workers were also held in Athens, despite heavy rain, with a total of around 15,000, which are big demonstrations compared to similar protests in recent years, particularly given the bad weather conditions. 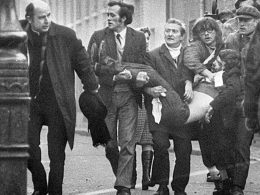 Sunday, 30 January 1972 saw one of the bloodiest and most callous atrocities committed during the Troubles. In an event that would become known as Bloody Sunday, British paratroopers (paras) fired indiscriminate live rounds into a crowd of unarmed civil rights protesters in Derry. This was state-sanctioned and premeditated murder, resulting in the deaths of 14 innocent people.
bySocialist Party
3 shares
3
0
0

The Communication Workers Union (CWU) leadership have agreed a deal with Royal Mail that they say “delivers on the major issues which postal workers have fought for”. The 80 page agreement has been met with a wide range of views amongst CWU members, as it has produced many “winners” but also a large amount of losers. Many delivery workers could lose between £10 and £30 a week.

The Socialist can reveal plans by the Assembly to privatise public services leading to billions of taxpayers money being given away to private companies, cuts to services and attacks on workers rights and conditions.

In its first 10 years of existence, the Assembly has handed over a staggering £1.3 billion of Public Private Partnership (PPP) contracts to private companies. If the Assembly gets its way the role of PPP in Northern Ireland is set to grow significantly, with Professor Allyson Pollock of the Centre for International Health Policy predicting a massive future bill in excess of £10 billion after contracts currently in the pipeline are signed. Since this February alone, more than £90 million has been spent on outsourcing contracts, mostly to private consultancy firms - a massive waste of public funds. (See below).