4 hours ago
Stormont Embroiled in Crisis: We need a Socialist alternative
4 hours ago
Sudan: Revolutionary struggle can end military rule
1 month ago
Ban petroleum licensing now!
1 month ago
Is this the end of the line for Johnson?
1 month ago
“Stepping stone” to nowhere: 100 years since Anglo-Irish treaty 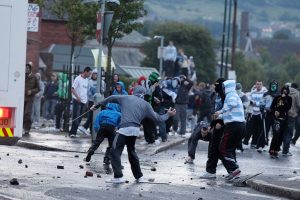 While the bailed-out banks continue to pay out millions in bonuses to the fat cat executives, it is a very different story for working class people.
A record 1,000 people are expected to declare bankruptcy this year in Northern Ireland. The Land & Property Services (LPS) which collects rates on behalf of the Northern Ireland Assembly Executive has dragged a staggering 46,611 people before the courts in the last financial year because they could not afford to pay rates.

Our origins We have been active in Northern Ireland since the start of the Troubles at the beginning of the seventies. At first we were known as Militant and then as Militant Labour. We became the Socialist Party in 1997. During the difficult early decades of the Troubles we were […]