In an hour long documentary, Peter Hain, Labour MP for Neath and a prominent anti-apartheid activist in his youth, returned to his native South Africa to try to discover why the ANC government is losing the support of the black working class and how it is now perceived after presiding over last year’s Marikana massacre where 34 Lonmin mineworkers were killed by the police.

In a surprisingly devastating critique of the ANC’s failure to ensure ‘a better life for all, especially the poor’ after 18 years in government, Hain looked visibly shocked and depressed when told during his visit by several traditional ANC supporters that after Marikana they would never vote for the ANC again!

Hain confirmed what the Democratic Socialist Movement (CWI section in South Africa) reported immediately after the massacre, that ‘Marikana has changed South Africa for ever’.

DSM members didn’t have to wait several months or hear the evidence at Zuma’s showpiece Commission of Inquiry to find out what really happened because they were told immediately after the massacre by those strikers who survived.

Marikana was pre-meditated murder, consciously planned and with the collusion of Lonmin, the police and the government at the highest levels.

The film footage of the mineworkers being massacred brought home the disturbing fact to Hain that the brutality of South African capitalism still remains under a black majority ANC government. The report explained that the National Union of Mineworkers was exposed as being in the pockets of the mine owners and the ANC-aligned unions (in Cosatu) were used to stop strikes!

What was missing from the coverage after Marikana was the development of the unofficial strike committees which spread the strike movement across the mining regions.

They were initiated and led by DSM members and supporters and involved dozens of shafts and over 150,000 mineworkers.

Mandela and the ANC

Hain inevitably highlighted the role of his hero Nelson Mandela and unwittingly explained his role in contributing to the dire situation facing the working class in South Africa today.

Mandela’s objective, according to Hain, was black majority rule and a stable democracy. In order to achieve this aim Mandela agreed to allow capitalism to continue unthreatened, dominated by white capitalists, in return for a black government in office.

The result, after 18 years in power, has been a widening of the gap between rich and poor and a small, corrupt black elite growing on the backs of the impoverished masses.

Hain tries to convince himself that it is not all bad. He says the ANC has built three million new homes.

I’ve seen them in Johannesburg and Durban and they are not called matchbox houses for nothing – if you lie down sideways your feet will stick out of the door! They are poorly constructed, many without toilets and having inadequate electricity and water supplies.

He points towards the new ANC schools that have been built but the teacher I spoke to at Freedom Park Township had 60 pupils in his class and no text books, which is unfortunately the norm throughout South Africa.

A thoroughly despondent Hain tackled President Zuma about the corruption that is rife inside the ANC government both nationally and locally.

Zuma dismissed the claims, denied using £20 million of state funds to refurbish his luxury complex and blamed the media for exaggerating the problem.

Even Hain was almost speechless at this incompetent, arrogant and patronising presidential response which was indicative of how divorced from the masses these ANC leaders have become.

Ironically Hain turned to the ex-ANC youth leader, Julius Malema, to seek some oppositional views to the corrupt leadership of Zuma.

After Marikana and during the two month mineworkers’ strike Malema tried to ingratiate himself to the strikers by demanding the nationalisation of the mines.

This was no ideological commitment but a populist attempt to gain support in his struggle against Zuma and to be readmitted back into the ANC.

Millionaire businessman Malema is drawn from the same corrupt mould as the rest of the black aspiring capitalists and is no friend of the working class.

Wherever Hain went during his two week visit the story of capitalist oppression remained consistent. In the Western Cape, farmworkers are expected to live on £6 a day but one farm owner generously allowed his labourers to ‘eat as many grapes as they like and you’d be surprised how much they eat’!

In the Eastern Cape there is mass migration of the young seeking work; and being shot dead in the mines of Rustenburg! The families they leave behind have literally no money and try to survive on the land.

This is the reality of present day South Africa but Hain concludes this impressive documentary by trying to remain optimistic that the ANC will live up to its democratic legacy.

Such wishful thinking is not unexpected from a Labour MP tied to capitalism in Britain.

However, the experiences of the mineworkers and other sections of the South African working class over the past several months have drawn far more concrete conclusions of how to deal with a big business ANC government.

The recent initiative of the mineworkers’ unofficial National Strike Committee, DSM and other working class groups, to launch the Workers and Socialist Party (WASP) in order to challenge the ANC in next year’s general election is a huge step forward.

A socialist alternative to a corrupt government that’s defending a brutal capitalist regime which presided over the Marikana massacre is the only solution to what Peter Hain described as ‘deeply, deeply depressing’!
Watch this on iplayer and send a donation to the CWI’s ‘South Africa Appeal’ today!

For more articles on South Africa, the DSM and WASP, go to the CWI website socialistworld.net

Cyprus on the edge of a catastrophic slump 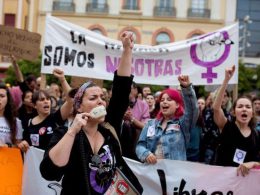