Being and Being Bought: Prostitution, Surrogacy & the Split Self by Kajsa Ekis Ekman.

As a socialist and women’s rights activist who continues to be perplexed, gob-smacked and horrified by the seemingly growing orthodoxy in left and feminist circles that Ekman entitles, “the story of the sex worker”, by which she means a sanitising of the sex industry and a justification for men buying sex, I felt a gushing sense of relief and also gratitude to the author while reading this enormously accessible, sharp and erudite book that looks at both the questions of prostitution and surrogacy.
Ekman puts both prostitution and surrogacy in the context of patriarchal capitalism; both of the hugely profitable sex and surrogacy industries commodify women’s bodies (the majority of the time it’s women in prostitution, in all cases with surrogacy) such that, as opposed to selling her labour or a service, women are forced to sell a part of themselves because there is no Cartesian dualism between the body and mind that are of course, inextricably linked. This means, Ekman contends, that the women often need to create a ‘split self’ for survival, such is the alienation this ‘reification’ causes. Kajsa Ekis Ekman is a Swedish left activist and academic who cites feminist and Marxist influences on her thinking.

The second half of the book deals with the burgeoning global surrogacy industry. Ekman sees an alter ego for the ‘whore’, in the ‘Madonna’ women who give birth to a baby for a worthy, childless couple, as it’s generally portrayed. Both women are objectified, albeit with one vilified by patriarchal capitalist society, and the other glorified. Both women’s bodies are commodified. Fundamentally, both are dehumanised. It’s incredibly unsettling to read about the enormous surrogacy industry worldwide. It’s a global phenomenon with gender inequality, class oppression and racial inequality stitched into it.
What an indictiment of capitalism it is, that babies and women’s wombs have been so widely commodified in the quest for profits that surrogacy has blossomed into an industry that includes types of baby factories in India. There are clinics that mainly poor women go into and must live and stay in constantly during their pregnancy while under strict supervision and instruction about every morsel of food that they eat each day, while being administered with various injections and medicines at the will of the clinic. The women have no recourse to lay any claim to the baby that they carry in their womb and give birth to. Most often it’s dark-skinned women producing a white baby for a relatively wealthy couple from the US. The women receive between 2500 and 6500 USD, which could be up to ten years salary for a peasant woman in India. This can mean that women in India are coerced by husbands or family members into signing up to be a surrogate.
The unjust lack of adoption rights for gay couples can to some degree, fuel this industry. It’s more fundamental than this, however, as Ekman explains. The focus of the surrogacy industry relies, not so much on a desire to rear and nurture children as it does on the question of biological connection. This is central. The argument is in a skilful and nuanced fashion, fostered, that being a mother or parent is inextricably linked with having a biological connection – this means that the woman who carries and gives birth to the baby is not important and is virtually non-existent, and furthermore, it intimates towards ownership of a commodity or possession, rather than the question of loving and caring for a small human being. In some twisted type of way, it’s an extension of a very old-fashioned, reactionary, and patriarchal view of family, children, child-rearing etc, whereby children were objectified as possessions that ‘should be seen and not heard’.
As Ekman points out, less focus on the question of biological connection and of a traditional view of the family could mean that many people who can’t have children of their own could participate positively in child-rearing in numerous forms of non-traditional family arrangements. The surrogacy industry relies on traditional sexism, both in relation to the worshipping of motherhood in a really sanctimonious and hypocritical fashion (whereby the surrogate mothers are on the one hand praised as angelic figures, and on the other hand are stripped of their rights and humanity as mothers and human beings), and in relation to a closed view of what can and should constitute a proper family arrangement. Fundamentally, surrogate mothers risk both their physical and mental health through pregnancy, child-birth and giving up their baby in a way that is utterly incomparible to any ordinary job, and represents an extreme example of Marx’s forewarning that under capitalism, everything becomes a commodity.
Being and Being Bought gives an incisive portrayal, not only of the sex and surrogacy industries, but also of the arguments used to justify them both, arguments that Kajsa Ekis Ekman skilfully and comprehensively pulverises. Her work is overflowing with humanity and empathy for some of the most downtrodden woman and girls in the world, in particular. Reading her book, I certainly got a sense that Ekman has antipathy for the capitalist system, and all the horrors and miseries it heaps upon huge swathes of humanity. However, the book is limited. It doesn’t enough emphasise the sex and surrogacy industries link to the profiteering nature of capitalism. It focuses solely on legal changes as a panacea in relation to how to deal with, curb and end both industries. There is no assessment of any negative consequences of or limitations to the laws or legal changes that Ekman is in favour of.
Most importantly, it fails to point out the need for a more fundamental challenge to the profit system, in order to genuinely end these industries. Ekman’s advocacy of the legal banning of altruistic surrogacy in my opinion is questionable and problematic including in terms of how it might be implemented. Nonetheless, this a valuable piece of work. It’s strongest when it engages with what Ekman deems, ‘pro-prostitution’ arguments:
“This admiration of the whore is no vaccine against contempt – it is exactly the opposite. It goes hand in hand with scorn, overt or covert, for her humanity, and a lack of insight into her actual living conditions.”
Being and Being Bought: Prostitution, Surrogacy & the Split Self by Kajsa Ekis Ekman (Spinifix Press, 2013)

Sinn Féin must back MLA's promise and end threat of fracking 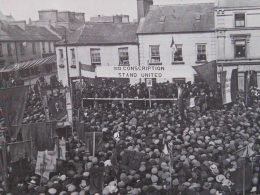 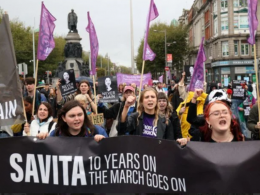