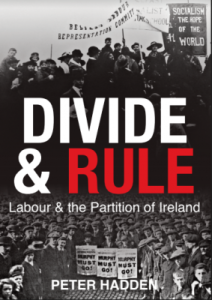 Written by Peter Hadden forty years ago, Divide and Rule is a Marxist classic. The book’s key argument is summed up in the first line: “The partition of Ireland was a conscious act on the part of British imperialism chiefly intended to divide the working class along sectarian lines.” Fifteen years later, in Troubled Times, which the Socialist Party also intends to reprint this year, Peter Hadden said that Divide and Rule was written “mainly as a challenge to the simplified, romanticised picture painted by nationalists.” But it was also a challenge to Unionist historians and to the revisionist school of Irish history which had been in the ascendent from the early 1970s onwards. What all these schools of history have in common is that they ignore the class interests and forces which have shaped the course of Irish history.

Due to restrictions around Covid-19, shipping of print editions will be delayed

To order print copies outside of the UK & Ireland don’t fill out the form below. Instead please contact us at, info@socialistpartyni.org