The Assembly parties and the Tory/Lib Dem government in Westminster will hear a very loud message from Unison members in our hospitals and schools. We do not accept the argument that wages should be squeezed, jobs should go and services should be cut to bail out the bankers.

For United Action across the Public Sector

There are workers on strike today in every hospital, health facility and in many schools across Northern Ireland. It is clear that workers in unions that are not on strike today support their fellow trade unionists. There is a real buzz about the strike and about the planned public sector strike on 30th November.

Over twenty other unions are now balloting for action with the vast majority of public sector workers involved in this developing movement. On 30th November up to 5 million public sector workers in Northern Ireland, England, Scotland and Wales will take action. While this strike has been called specifically on the issue of pension cuts, in reality workers are taking action against all the cuts. This will be the biggest strike in the public sector in decades, greater in size than even the tumultuous General Strike of 1926.

Democratic Control by the Members is Vital

Strike action is necessary to stop the cuts which represent the real risk to the ill and vulnerable. Workers have expressed genuine concerns about the welfare of the ill and vulnerable that they care for. To best organise and strengthen strike action, decisions on what emergency cover should be provided needs to be democratically discussed and arranged by staff who are best informed to take such decisions.

We want to win – not just lodge another protest. We know that the Assembly Executive and the British government are not going to back down easily and that a one-day strike will not be enough. We also know, however, that they have backed down before – such as from enforcing water charges, privatising forests or from pushing through major increases in tuition fees. In other words, we can win, but only with resolute, co-ordinated and united action that will require further intensified strike action.

It is absolutely vital that all the unions now fight side-by-side. Some Unison members have asked why the leadership didn’t wait for the other unions to organise their ballots. It is obvious that action is immensely stronger when unions fight together and that that we must fight all the cuts.

It is not credible to suggest that some cuts are acceptable and others are not, as this will put one group of workers against another – exactly what the politicians in the Assembly and Westminster want!

Unite against all cuts to all public services

Members of some other unions ask why they are being asked to strike on the issue of pensions alone. They want to defeat all the cuts. They want to defend services as well as their jobs, terms and conditions. All public sector workers must be included to debate the way forward.

What is clear is that properly organised and determined industrial action builds the confidence of working class people. In 1982, health workers engaged in a titanic battle with the Thatcher government over pay.

During that dispute the confidence of workers was increased by the democratic way in which the strike was organised, in particular through bodies such as the North & West Belfast Joint Shop Stewards Committee.

In the classroom assistants strikes several years ago, workers were organised from the schools up through regular mass meetings and elected strike committees.

Strike leaders who weren’t on strike themselves gave up a day’s pay on each strike day. Such a democratic approach, and the accountability of strike organisers to the members, will build a solid strike on November 30th.

Unison and all the unions must organise elections of strike committees of their own members in each workplace, and joint committees across all the unions and all workplaces. These strike committees need to link up across the health trusts and education boards, and across every area of the public sector. It is essential that 30th November is as solid as possible. The democratic involvement of members in the run-up to 30th November will greatly strengthen action and prepare for a necessary escalation of strike action after November, including the option of a one day general strike of all workers – public and private.

Such a movement would send the clearest possible message to the Assembly Executive and the Tory/Lib Dem cabinet of millionaires – we won’t pay for the bankers’ crisi s!

Socialists organising in the Universities 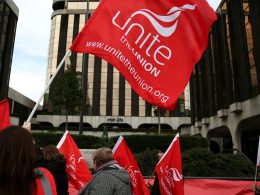 Unite members at Fujitsu have voted 72% in favour of accepting ACAS proposals after taking 10 days strike action against the companies moves to introduce compulsory redundancies and draconian attacks on pay and pensions.

The proposals include commitments to allow union representatives to participate in several reviews into redundancies, pension arrangements and signing a definition of promotion. However, Fujitsu bosses have refused to withdraw plans to impose compulsory redundancies, merely to postpone them until after 26 March.

Protest against cuts to hospitals, schools and vital public services

A protest has been called on Thursday 24th June from 5-6pm outside the European Commission offices on the Dublin Rd in Belfast to oppose the cuts to public services to be announced in this weeks Budget.

Letter of support from unions and political parties
Read more...