Workers at the BBC are currently participating in a 48 hour strike in a bitter struggle against managements attempt to drive through draconian attacks on pensions.

Members of BECTU and the National Union of Journalists (NUJ) have voted by more than 90% in favour of strike action to defend their pensions. Management have been attempting to push the retirement age from 60 to 65, increase the contributions to pensions from 4% to 7%, pensions increments to be limited to 2.5% or the Consumer Price Index, and scrap the final salary pension element. The announcement of strike dates on 5 and 6 October forced management to table a slightly improved offer. Unfortunately, BECTU and Unite have accepted this revised attack on pensions, but NUJ have rejected it. BBC director general Mark Thompson who last year was paid £834,000 has written to workers urging people to cross the picket lines – activists on the ground across all the unions in the BBC should ensure Thompson does not get his way.

Thousands march in Belfast against cuts

208 workers at the Linamar plant in Swansea, and their families, face the dole as the Canadian car parts company announced the closure of the Swansea plant by the end of this year on Wednesday 7 July.

The company had told the union that it would come to the talks with an 'option A' - confirmed product sourcing and a future, or 'option B' - a closure. 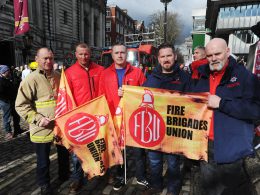 FBU – Organising to Save our pensions

In September 2006 the London Fire and Emergency Planning Authority (LFEPA) acting on guidance from New Labour’s Department of Communities and Local Government stopped paying injury pension to three disabled former London Firefighters who have suffered debilitating injuries in the course of their duties.
byArchive