The continued detention of the Socialist Party MEP Paul Murphy and the other activists from the MV Saoirse and the Tahrir continued into its fourth day. They were brought before a judge today in accordance with Israeli law, but were returned to their cells as their detention continues.

This continued, unjust, detention follows the pattern of bad treatment which the activists have faced since their ship was illegally boarded in international waters. The ship was boarded in such a manner as to put their lives at risk, passengers were tasered. On arriving in prison their right to a phone call within 24 hours was ignored, as well as them being targeted in a campaign of sleep deprivation.

Their continued detention and the treatment which they have received is politically motivated. The Israeli regime is clearly intent on punishing these activists as severely as possible to deter any further attempts to break the blockade of Gaza.

The Minister for Foreign Affairs Eamon Gilmore must step forward and demand the immediate release of all the kidnapped activists. The Israeli Ambassador to Ireland should be expelled immediately for his state’s role in the abduction and continued detention of the Flotilla crew.

Where now for Libya after the downfall of Gaddafi's regime? 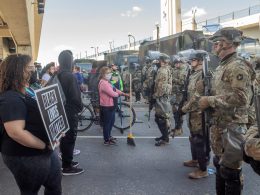 Socialist writings on Ireland and the national question

Peter Hadden, who served for many years on the Socialist Party National Executive Committee and held the post of Northern Secretary, as well as on the CWI’s International Executive Committee, sadly died last May. 2011 sees the welcome development of Peter’s many articles and pamphlets being posted on the Marxists Internet Archive (MIA - www.marxists.org) a widely-read site which makes accessible the works of a large variety of Marxist writings.

Former Labour minister Lord Hutton, on a comfortable MP's pension, has released an interim report on his investigation into public sector pensions.

To nobody's surprise, he has declared that workers should pay more and work longer to earn a lower pension.

There was an emphatic response to the savagery of the Con Dem spending cuts on Saturday in Edinburgh. Just 3 days after the government’s spending review that had proposed cuts of £81 billion in public spending, well over 20,000 people took to the streets for the Scottish TUC demonstration.