Where now for Libya after the downfall of Gaddafi’s regime?

While the defeat of the last major forces defending Gaddafi’s dictatorial and increasingly megalomaniac regime was widely welcomed, the way in which it fell means that clouds now hang over the future of the Libyan revolution.The combination of the absence of an independent workers’ movement, the bitterness resulting from an increasingly brutalised civil war and particularly Nato’s intervention, have combined with Libya’s own history and characteristics to produce a complicated political and social situation.

Western leaders celebrated the death of their recent friend and ally Gaddafi with a combination of hypocrisy and profit seeking. But while some Nato leaders have used this to attempt to rehabilitate the doctrine of ‘liberal intervention’ after the disaster of the Iraq invasion, others are more careful as they are not confident of Libya’s future.

Western governments’ questioning over the manner of Gaddafi’s death gives themselves some space to distance themselves from future developments in Libya should it not go the way they hope.The Obama administration is being completely hypocritical when it asks questions about Gaddafi’s killing; after all, instead of taking him prisoner, it killed Bin Laden and has recently ordered the summary execution without trial of US citizens in Yemen by remote controlled drone attack.

Socialists would have wanted Gaddafi to stand trial, before a popular court for his crimes, something which would have exposed the corruption of his oppressive regime and his links with imperialism. But it is precisely because of these links that imperialism is openly happy that Gaddafi was killed.Multinationals have started looking on how they can profit from rebuilding Libya. The British government has calculated that £200 billion worth of contracts will be “up for grabs” in Libya (London Evening Standard, 21/10/11).

So, the day after Gaddafi’s death, the UK defence minister told British companies to “pack their suitcases” to go to Libya and get contracts. It was not reported whether he said what should be in the suitcases, but it’s a fair guess that bribes will be offered. Just two days after this it was reported his own ministry was taking legal steps to prevent a retired British lieutenant-colonel, Ian Foxley, publishing in a book details of the alleged payment of £11.5 million in bribes to a Saudi prince in connection with a defence contract.

Mass uprising
Initially Gaddafi, learning from the overthrow of Ben Ali and Mubarak, launched a counter-offensive against Benghazi and other centres of the February revolution. These were certainly threatened but could have been defended by mass popular defence of the city alongside a revolutionary appeal to workers, youth and the poor in the rest of Libya that could have led to an earlier victory.

In Benghazi at the start of the revolution English language posters were put up declaring “No to foreign intervention – Libyans can do it by themselves”. But the self-appointed leadership of the uprising would not do this. Dominated by a combination of defectors from the regime and openly pro-imperialist elements, the Transitional National Council (TNC), pushing aside the initial popular mood against any foreign intervention, looked to the imperialist powers and semi-feudal Arab states for support.

Imperialism
The main imperialist powers seized this opportunity to step in, justifying their intervention on ‘humanitarian’ grounds. Their aim was to try to contain the revolution, rebuild their points of support in the region and increase their exploitation of Libya’s natural resources.

The same imperialist powers that shouted about defending Benghazi did nothing to halt the Israeli government’s 2008/9 offensive in Gaza and, this year, maintained a virtual silence on the brutality of their close allies, the Bahraini regime and Saudi autocracy when they moved to violently crush opposition.

In a manner reminiscent of the collapse of the Stalinist regimes 20 years ago, imperialism took advantage of a spontaneous movement that knew what it was against but had no clear programme of its own. Imperialism has not only accommodated itself to the revolution and but has, in a certain sense, benefited from it.

This is why principled socialists opposed Nato’s intervention and consistently warned against any illusions in Nato, stressing that Libyan working people and youth had to build their own independent, democratic movement if the revolution was really going to transform their lives.

The TNC is still in many ways largely a fictional national force, its power base being largely in the east around Benghazi which is where they proclaimed on 23 October the end of the civil war.The TNC leaders have not been able to appoint a new ‘cabinet’ to replace the one that resigned after last July’s still unexplained killing of the TNC’s military commander, General Younes, by some of his erstwhile rebel allies.

The TNC’s first ‘prime minister’, the deeply unpopular Jibril, has now been replaced by Ali Tarhouni. Tarhouni, until the revolution, was a university economics lecturer in Seattle, USA. His wife is a lawyer who works for the Washington state attorney general.

The tragedy of the first stage of the Libyan revolution is that the largely spontaneous initial uprising did not really result in the development of the democratic, self-organisation of the working masses and youth.Despite the involvement of large numbers of Libyans in the fighting and the mass arming of the population, there are not, so far, any signs of Libyan workers, youth and poor striving to establish their own collective, democratic independent rule over society.

With no strong democratic, independent organisations in communities and workplaces etc, militias and mosques are taking the lead in maintain security and getting services restarted. But these militias are not democratically run or controlled, they are divided by geographical, tribal or ethnic origin differences as well as viewpoints and their leaders have their own agendas.

In the absence, so far, of a developing workers’ movement and Left forces, Islamist groups have started to attempt to build wider support. The autocratic Gulf oil state of Qatar, which owns the Al Jazeera TV network, has been playing a key role in this by backing individual leaders and militias.The NTC president, and Gaddafi’s former justice minister, Jalil proclaimed that “as an Islamic country, we have adopted Sharia as our principal law”. Just who decided this was not clear, but it reflected the growing strength of Islamist forces.

Imperialism, while hoping that the TNC will be able to incorporate the different elements to stabilise the situation, also has fears about how the situation could unfold.Stabilisation will not be easy. Many Libyans, particularly the youth, now feel that they have a chance, and the power, to decide their own future. It will be difficult to immediately establish the authority of the TNC or any other government.

Additionally there are fault lines between the different militias, for example those of Misrata and Zintan from the west and those from Benghazi in the east. The Berber minority, who played a key role in the fighting in the west have their own demands while there are tensions between the various militias in Tripoli.

Currently imperialism hopes that Libya’s oil wealth will keep the country together. But it can also lead to struggles, particularly between competing elites, over how the loot is doled out.However, these are still early days; Libyan workers and youth have still not put their demands on the table. A key factor in the revolution was the tremendous revolt of the youth against the Gaddafi regime’s suffocating corruption and nepotism.

Oil and gas have made Libya a rich country. The World Bank estimates it has a $160 billion foreign currency reserve. But all this depends on the oil price and a renewed world economic crisis would fundamentally change the situation and threaten to plunge the country into disaster. When oil prices fell in the 1980s, Libya’s GDP collapsed by over 40%.

Workers’ alternative
Now, more than ever, the creation of independent, democratic workers’ organisations, including a workers’ party, are vital, if working people, the oppressed and youth are to achieve a real revolutionary transformation of the country and thwart the imperialists’ plans, end dictatorship and transform the lives of the mass of the people.

Without this other forces will step into the gap. To limit this and to achieve these goals, a workers’ movement would need to defend all democratic rights, involve and defend the rights of migrant workers, oppose the privatisation of Libya’s assets, demand the withdrawal of all foreign military forces and oppose all foreign military intervention, demand the democratic election of a Constituent Assembly and, above all, reject participation in any government with pro-capitalist forces.

Instead, it would strive for a government of representatives of the workers and poor, based upon democratic structures in the workplaces and communities, which would use Libya’s resources for its population. This would be the real victory for the Libyan revolution and set an international example of ending both dictatorial rule and the miseries of capitalism.

Which way forward for the ’Occupy’ movement

Debate: The way forward for the anti-cuts movement in Britain

One issue dominates all others for the workers' movement now and for the foreseeable future - how to defeat the avalanche of cuts and tax rises that is engulfing us. On 22 January 2011 the National Shop Stewards Network (NSSN) has called a national anti-cuts conference. This conference has the potential to make a crucial difference to the success of the anti-cuts movement. It will bring together workplace representatives with local anti-cuts campaigns to debate a very simple motion, based on the following proposals which were agreed by the NSSN steering committee. 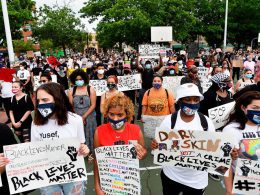 Rage and anger from below has forced union leaders to ballot members in preparation for the ‘battle of our lives’.