The current battle over pensions is a defining one for our movement. Over two million workers from 24 unions took action together on 30th November in the biggest show of strength in living memory.

This show of solidarity and determination gave hope to millions beyond the trade union movement who are looking for a lead against a government which is carrying out the most breathtaking transfer of wealth and power in British history through a cuts and privatisation programme in the interests of the banking and business elite and against that of 99% of the population.

Most working people instinctively know that the best way to confront this government’s attacks is through the organised strength of the trade union movement.

Defeating the attacks on pensions would not only defend the terms and conditions of millions of mainly low-paid public sector workers but would also create a firm platform on which to challenge the wider cuts programme itself.

Workers took action on pensions because they are being forced to pay more, get less and work longer. They know there is no need for this attack whatsoever, it is the imposition of a tax on public sector workers as the money stolen from them will go into the Treasury coffers in order to help pay the deficit created by Cameron’s banking cronies rather than to the pension funds themselves.

Public sector pensions are affordable, sustainable and falling in cost. The attack, like the cuts more generally, is ideological and part of a systematic attempt to destroy the public sector in this country which has been deemed too expensive by the bankers and big business.

John Cridland, the head of the Confederation of British Industry, gave the game away when he said that public sector pensions must be reformed in order to make outsourcing affordable.

The strike on 30 November – involving 24 trade unions and up to two million workers – was the biggest single day of strike action in many decades.

It terrified the government, with Cameron having to quickly retreat from his claim it was a “damp squib” and admit that it had been a “big strike”.

It showed the power of public sector trade unions – united together – to bring the country to a halt.

Yet now Brendan Barber and the leadership of the TUC are proposing that we throw away our advantage and accept a rotten deal on pensions.

This would be a huge mistake. It would mean all public sector workers having to work longer, pay more and get less pension.

For the vast majority it would mean accepting a deal that is little or no better than what was on the table before 30 November.

Only workers aged over 50 have been excluded from the brunt of the cuts in pensions, although some aspects, such as the switch from RPI to CPI, also affect the over 50s.

In any case, this is not a new proposal and was rightly rejected by trade union leaders before, including Dave Prentis of Unison.

Accepting a rotten deal on pensions will also give the government more confidence to accelerate its massive cuts programme.

If they can get away with it the government intends to inflict a ‘decade of austerity’ on Britain. The cuts proposed are so brutal that even far-right Tory Norman Tebbit has said that he can’t stomach them all!

It is essential that the trade union movement maintains a united front and steps up the struggle in defence of our pensions and against the cuts as a whole.

If we do not, then the Con-Dems will continue to drive down the living standards of the majority while bending over backwards for the richest 1%.

Just look at how Goldman Sachs and other major corporations have been let off over £25 billion in tax over cosy dinners with the taxman, while working class, and many middle class people, are facing breathtaking cuts in living standards.

Britain’s richest 10% are now an average of £100,000 a year better off than they were in 2005, while the majority have suffered an absolute fall in income.

This is set to get worse as rail fares rise by 9%, fuel prices continue to increase and wages fall.

On 12 January the executives of all the unions involved in the pensions struggle will meet to discuss whether to accept a deal. Trade unionists must inundate their leaders with emails, phone calls, petitions and lobbies demanding that they:

When Lib Dem minister Danny Alexander put the government’s pensions proposals to parliament on 20 December he said clearly that the government had achieved all its “savings goals” and would save tens of billions of pounds. That money is being stolen from public sector workers’ pensions.

There is no increase in the ‘cost ceiling’. This means that even where there have been some small improvements for some workers’ accrual rates (the rate per year at which pension benefits are built up) they are being paid for by cuts in the pensions of other workers in the same scheme.

The amount that workers will have to pay into their pensions will still increase for all public sector pension schemes, by an average of 3.2% of salary, phased in over three years. This means that someone earning £25,000 will have to pay £800 a year more – effectively an immediate £800 a year pay cut! In health, the leadership of Unison is claiming it has won a concession because those earning less than £26,000 will not have to pay more into their pensions for one year. However, even this puny concession is being paid for by higher paid public sector workers having to pay more.

Pensions will be linked to the CPI rather than the RPI inflation index. This will mean that over an average 20-year retirement, pensions will be worth up to 20% less.

In local government the government has agreed to delay implementing these attacks by a year, until 2014, but only on the basis of the unions signing up now to misery a year down the line.

This attack is not about the cost of the schemes, but about the government’s attempts to make public sector workers pay for a crisis they didn’t create!

The battle isn’t over – keep the united front!

The Con-Dem government is trying to con public sector workers that the pensions struggle is over. This is a lie.

In health, Unite has not accepted the deal. In local government, Unite, Unison and GMB withdrew, following a letter by local government minister Eric Pickles which undermined the ‘deal’.

It is clear that the leadership of Unison is determined to end the pensions struggle and accept a rotten deal.

However, under pressure, the general secretary Dave Prentis has had to delay a decision until it has been discussed at the Service Group Executives that are meeting on 10 January. Unison members will be lobbying the meeting.

Trade unionists across the public sector need to make sure that all the union leaders hear a deafening roar from their members – keep up the pensions fight! Set the date for the next coordinated strike!

Assembly Executive told cuts to hospital services will be resisted

Minister for Health Edwin Poots and his partners in the Assembly Executive have received a “warning that if the Executive proceeds to make further cuts to health services, a mighty opposition will be ready in every community affected.”

At a time when the working class in Northern Ireland is suffering record job losses, deep cuts in pay and public services, the perspective raised as a result of the Real IRA’s shooting of soldiers and two workers in Antrim of a possible return to sectarian conflict outlines the utter reactionary role of such attacks. 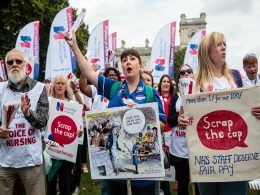 The proposed 1% pay-rise for all NHS staff in Britain - a pay-cut in real terms - has rightfully led to widespread anger across a workforce who have been on the frontline in fighting the pandemic.