As we publish this article the occupation movement has begun to spread all over the US.

For example occupations are due to begin in Boston today and Seattle tomorrow. Many local unions have also begun to pledge support to the movement.

In the last few days the New York Transport Workers Union, one of the biggest unions in New York, voted to support the movement and to send members to the occupation on Friday afternoon. The Teamsters union has also voted to support the occupation and members of the United Pilots Union have been on the demonstrations in uniform. This development of sections of the organised working class linking up with the movement is significant. This process must be encouraged and further developed for the movement to continue growing into a challenge to the big business attack on living standards.

On Saturday Sept 24, the “Occupy Wall Street” struggle set out on a march. This was the eighth day that young people, workers and activists have been occupying a plaza in Manhattan’s financial district two blocks away from Wall Street. It started as a routine march. The usual slogans were chanted: “Banks got bailed out! We got sold out!” “Whose streets? Our streets!” “Tell me what democracy looks like? This is what democracy looks like!”

It was spirited and energetic from the start. This ongoing occupation has drawn national and international attention, seen as attempt to stand up to corporate greed and challenge the domination of the big banks over our economy, our government and our lives. It’s drawn inspiration from the mass youth occupations in Spain and Greece, as well as the revolutionary upheavals in Tunisia, Egypt and across North Africa and the Middle East.

Many are long-time activists that have been organizing for years. Others are completely new to organizing and protesting, participating for the first time in their lives in a social struggle. While many are inexperienced, they’ve shown a tremendous persistence and fighting spirit. They chant: “All day. All week. Occupy Wall Street!”

As we began to march north up Broadway, our numbers gradually grew and the march started to move into the streets, blocking traffic. With no predetermined march route or official city permit, the police struggled to keep up, trying in vain to direct and control the march and push it back to the sidewalks.

“Whose Streets? Our Streets!”

Unlike most demonstrations in New York City, we were not penned in like animals, forced to one side of the street, isolated and marginalized from the rest of the city. Bystanders watched and waved and some joined in. We marched through Washington Square Park, where more young people joined. Our numbers were well over 1,000 marching freely through the streets of Manhattan, our voices heard loud and clear.

Since moving to New York about four years ago now and attending countless demonstrations, protests, marches, actions and speak outs, I had never been on an action that was able to freely march through the streets. We covered about 2.5 miles, arriving eventually at Union Square. We were not suffocated by the pens or sidelined by a motorcade of police bikes. For the first time in a long time people in New York were able to practice their right to free assembly without infringement or restriction.

It was a tiny victory for the working people and youth of this city, a victory that the police and city government were eager to snuff out. This occupation, now lasting over a week, is not simply a nuisance. The ruling establishment is actually very afraid that this could spread and grow and threaten “order” in the city, an order where the rich get richer and the rest of us are left behind, where the super-elite, the “top 1%,” run society while “the 99%” have no voice. This is why Occupy Wall Street has raised the slogan “We are the 99%!” in an attempt to fight back and be heard.

After rallying very briefly at Union Square, the march turned around to head back “home” to the encampment at the newly renamed Liberty Plaza. The police had amassed a bigger force behind us and unfurled large orange nets. At first it seemed like they only intended to channel the march, split us up and disrupt the action. But we quickly learned these were giant fish nets cast widely to catch as many people as possible.

The Cops Get Violent

The police turned aggressive, violently pushing protesters, grabbing them, throwing people to the ground and arresting them. We ran but they kenneled in dozens at a time, pinning them between nets and buildings. I narrowly escaped a net and we chanted on the opposite side calling for the release of our brothers and sisters.

We were peaceful. They were violent. We were exercising our freedom of speech and freedom of assembly and they brutally violated these rights. A small group of young women, who were trapped in a net, standing perfectly peacefully, were suddenly pepper-sprayed for no reason. The video of this incident has gone viral, prompting international news coverage. Around 100 were arrested, including several bystanders who were not part of the protest, held in busses and jail cells for hours, and only released at 5 a.m. the next morning.

The police had one aim: intimidation. This outrageous behavior on their part was intended to strike fear into the youth and break our spirit. Police violence may indeed make some people more fearful of protesting, but it also inspires wider outrage and solidarity. Overwhelmingly the core of the movement has stayed strong and continued the occupation.

This exposes the completely hypocritical role of the police force and the state. They brutally suppress any attempt to peacefully speak out against corporate domination. Meanwhile the real criminals and crooks on Wall Street walk freely, making billions off our backs, demanding we pay for their crisis and protected by an oppressive regime that uses the laws when convenient and force when they choose.

Most of us made it back to the plaza exhausted but excited, shaken but angry and determined. I found out back at the plaza that one of our comrades had been arrested. Later, he compiled this video of the march, including footage from his own arrest. We were all concerned for the welfare of our brothers and sisters who had been assaulted and taken away.

But I also began to think about where this movement was headed. It has captured the imagination of hundreds of people and captured the attention of perhaps hundreds of thousands around the world. There is constant discussion and debate about how it can become bigger. Many of the new people excited by the energy and strong sense of community within the occupation ask: “Why are there not more people here?”

There is no simple answer but one thing is for sure. There are thousands out there who are very sympathetic to this movement, many of whom would like to participate but may not be able to. They have work and families and can’t afford to occupy space indefinitely. They are either not able or maybe not yet prepared to make big sacrifices, but they want to support this action. The question is not simply how can we get more people to the occupation but how can we get more involved in the movement in general.

With the attention that Occupy Wall Street is receiving and the army of full-time activists, Liberty Plaza could become a hub for organizing a wider struggle. As a next step we could call another mass demonstration on Saturday with some basic demands like: Make Wall Street Pay for the Crisis; Tax the Super-Rich; Jobs Not Cuts; Education and Health Care, Not War and Bank Bailouts; Stop Police Brutality and Defend Our Democratic Rights. This way, thousands of people could participate and help grow the movement. Occupy Wall Street should publicly call upon all progressive organizations, especially the unions, with their thousands of members and resources, to participate and mobilize for mass demonstrations.

There is also talk of spreading occupations to other cities. Already in the works is an occupation of Washington, D.C., on Oct 6 (www.october2011.org). Something is changing in this country. Working people and youth are becoming more politicized and radicalized. There is deep anger that is growing daily in U.S. society and it is bubbling just below the surface. It cannot be contained forever. It will explode.

Occupy Wall Street reflects some of this anger and radicalization that is developing. From Wisconsin to New York City we’re experiencing the aftershocks of social earthquakes now rocking the planet caused by the deep subterranean tensions of an enduring global economic crisis. The epicenters of these quakes have so far been seen across Europe, North Africa, the Middle East, and other parts of the globe. But it may not be too long before the tremors in the U.S. become full-blown social convulsions.

Review – A ‘dis-Service’ to Leon Trotsky

Review of Trotsky, a Biography by Robert Service

This book is very thick – running to 600 pages – but is very thin when it comes to an honest political examination and analysis of the ideas of Leon Trotsky, the subject of Service’s tome. 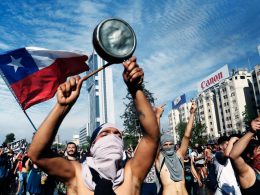 The Chilean people gave another example of consciousness and strength this Sunday 25 October. The Constitution inherited from Pinochet’s dictatorship was rejected by 78% of voters in the plebiscite that turned out 7.5 million people, the highest electoral participation in the history of the country.