The final days of the trial revealed the disgusting new depths to which the US Military is sinking in an effort to persecute Chelsea (formerly Bradley) Manning. In 2010 this brave young military intelligence analyst released hundreds of thousands of secret documents to show the world the true face of the US wars in Iraq and Afghanistan.

Finally going to trial after more than three years behind bars where she was tormented with solitary confinement, shackling and sleep deprivation, Manning was faced last month with charges adding up to 136 years in prison.

Senior military and government figures openly admit that the final sentence of 35 years is intended to scare US soldiers into keeping their heads down and their mouths shut. Meanwhile the US military is using grotesque tactics to try to discredit Manning and demoralise those who rightly see her as a hero and icon.

Last week the US military released photographs of Manning dressed in a wig and make-up. Coming so close to the sentencing, this looks like a crude attempt to discredit Manning by drumming up and playing into trans-phobic prejudice. More importantly, in an example both of trans-phobia as well as the stigmatising of those with mental health issues, a consensus emerged between the prosecution and the defence teams that Manning apparently leaked the documents as an act of insanity resulting from gender identity problems.

The attempt by the US military and government to write off Manning’s great act of defiance as insanity is completely futile – vile acts of the US military have been exposed and nothing they do now can change that.

The truth is that Manning made her motives totally clear in statements and online conversations: to “show the true cost of the war”, to spark “worldwide discussion, debates, reforms”. Manning realised that she was part of a machine that was inflicting carnage, oppression and torture on a huge scale, and tried to undermine it by releasing the truth.

In any case, mental health problems abound throughout the US military; with suicide taking the lives of more soldiers than any bullets or bombs. Given the horrors that soldiers who are stooges of US imperialism and corporate interests carry out ‘in the line of duty’, this is no wonder. Thousands of LGBT people work in the military and in fact face discrimination. Obviously, like many others, Manning was under serious personal strain. But leaking 700,000 personal documents to Wikileaks was a planned, bold and conscious political act, not a frustrated outburst.

The most dismaying event in the last few days was Manning’s apology, in which she said sorry for “hurting” the United States and for believing that “I, a junior analyst, could possibly change the world for the better” instead of trusting those with the “proper authority.” There are many reasons why Manning might have made this apology, but a genuine change of heart or a sudden “coming to her senses” was never likely to be one of them.

The most likely theory is that it was part of a politically motivated back-room deal: renounce your actions, and we’ll reduce your sentence. The fact that the sentence was on the lower end of the scale (the prosecution wanted her locked up for 90 years) backs up this theory.

In a letter to president Obama released yesterday (below) Manning makes a powerful and categorical defence of her actions, saying:

“The decisions that I made in 2010 were made out of a concern for my country and the world that we live in.”

In requesting a pardon that will never come from a president with such contempt for democracy and human life as Obama, Manning goes on:

“If you deny my request for a pardon, I will serve my time knowing that sometimes you have to pay a heavy price to live in a free society. I will gladly pay that price if it means we could have a country that is truly conceived in liberty and dedicated to the proposition that all women and men are created equal.”

The amount of secrets a regime keeps and the amount of lies it tells are an indication of the deep contradictions and depravity in its politics. The US government now classifies over 90 million documents a year. This number, as it climbs by tens of millions year-on-year, is like an index of the decay of democratic rights in the midst of a crisis of capitalism and barbaric imperialist wars.

In the drama around the sentencing of Chelsea Manning we have seen even more evidence of this, with the establishment trying to smear her through bigotry and neutralise her politically through Stalin-esque forced “confessions”.
The text of statement by Chelsea Manning sent to president Obama

The decisions that I made in 2010 were made out of a concern for my country and the world that we live in. Since the tragic events of 9/11, our country has been at war. We’ve been at war with an enemy that chooses not to meet us on any traditional battlefield, and due to this fact we’ve had to alter our methods of combating the risks posed to us and our way of life.I initially agreed with these methods and chose to volunteer to help defend my country. It was not until I was in Iraq and reading secret military reports on a daily basis that I started to question the morality of what we were doing.It was at this time I realized that (in) our efforts to meet the risk posed to us by the enemy, we have forgotten our humanity.We consciously elected to devalue human life both in Iraq and Afghanistan. When we engaged those that we perceived were the enemy, we sometimes killed innocent civilians. Whenever we killed innocent civilians, instead of accepting responsibility for our conduct, we elected to hide behind the veil of national security and classified information in order to avoid any public accountability.In our zeal to kill the enemy, we internally debated the definition of torture. We held individuals at Guantanamo for years without due process. We inexplicably turned a blind eye to torture and executions by the Iraqi government. And we stomached countless other acts in the name of our war on terror.Patriotism is often the cry extolled when morally questionable acts are advocated by those in power. When these cries of patriotism drown out any logically based dissension, it is usually the American soldier that is given the order to carry out some ill-conceived mission.Our nation has had similar dark moments for the virtues of democracy — the Trail of Tears, the Dred Scott decision, McCarthyism, and the Japanese-American internment camps — to mention a few. I am confident that many of the actions since 9/11 will one day be viewed in a similar light.As the late Howard Zinn once said, “There is not a flag large enough to cover the shame of killing innocent people.”I understand that my actions violated the law; I regret if my actions hurt anyone or harmed the United States. It was never my intent to hurt anyone. I only wanted to help people. When I chose to disclose classified information, I did so out of a love for my country and a sense of duty to others.If you deny my request for a pardon, I will serve my time knowing that sometimes you have to pay a heavy price to live in a free society.I will gladly pay that price if it means we could have a country that is truly conceived in liberty and dedicated to the proposition that all women and men are created equal.

Iran: Tensions with the US and its allies are ratcheted-up

Workers and poor must rely on their own strength to resist
War clouds are gathering, once again, over the Middle East. Heightening tensions over the last months between the US and its allies and Iran have seen covert assassinations of Iranian nuclear scientists, cyber warfare, attacks on Iranian military and missile installations, and a build-up of Western forces in the region and speculation of military preparations for air attacks on Iran. 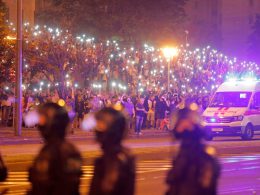 Belarus: Election Fraud Spills out onto the Streets