UGTT union and opposition call for a general strike 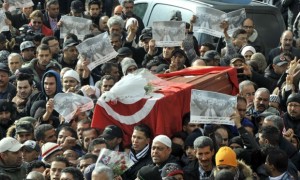 The CWI and its supporters in Tunisia vigorously condemn the brutal murder of the left opposition leader, Chokri Belaid. ‘Chokri’ was the leading figure of the left-wing ‘Democratic Patriots’ Party, with a strong influence in the UGTT trade union federation, and a spokesman and leading figure of the left coalition, the ‘Popular Front’. He was a well-known and long-standing opponent to Ben Ali’s dictatorship, as well as a lawyer with a long record of defending the victims of political repression, under the old as well as the new regime. He was imprisoned by both the Bourguiba and Ben Ali dictatorships.

On the morning of Wednesday 6 February, Chokri was ruthlessly shot with four bullets in the head, neck and chest, as he was leaving his house. Chokri Belaïd subsequently died of his injuries in hospital.

This act is not an isolated incident. Based on all evidence, it is clearly a professionally-organised political assassination, targeting a symbolic figure of the left. And this in a context of growing tension and political violence from the state forces, from fundamentalist Salafist bands, as well as militias at the service of the ruling Ennahda party.

In statements on the radio on the eve of his assassination, Chokri Belaïd reported death threats he had received recently because of his political stance. Last Saturday, he had similarly accused “mercenaries” hired by the Ennahda party of carrying out an attack on a Democratic Patriots’ local meeting in Le Kef, which left 11 people injured. The Ennahda-led government regarded Belaïd as one of the instigators of ‘social unrest’ in the country. By attempting to silence his voice, it is the revolution, and the resistance of the working class and the youth, as a whole, which are in the firing line.

The CWI has never hidden its differences with the political orientation of Chokri Belaïd and of the Democratic Patriots. We nevertheless want to express our full sympathy with all the activists of this organisation, as well as with the left in general and with the revolutionary people of Tunisia, and our deep feelings of resentment against this cold-blooded assassination. This adds to the already too long list of Tunisian martyrs who lost their lives fighting against injustice and oppression, and for a better society.

The overwhelming majority of Tunisian people reject this act of violence. Immediately after Belaid’s death, a large wave of anger is already resonating throughout the country. Shortly afterwards, tens of thousands of people were already protesting in Tunis, Le Kef, Gafsa, Sousse, Sfax, Sidi Bouzid and other cities, demanding justice and the fall of the present government and a “new revolution”.

Acts of violence, riots, and the burning of Ennahda offices have also been reported in some areas. While we understand the rage and anger which exists, we also genuinely think that the most efficient way to express it remains through the channels of organised mass mobilisation, the power of working class action and of their powerful trade union centre, the UGTT.

The setting up of collective bodies of defence and protection, democratically organised by the population in the neighbourhoods, could avoid excesses by rioters and face police repression, as well as the predictable violence of some militias. Stewarding teams could be set up in that context, working in conjunction with the UGTT, the UDC (unemployed union) and other popular organizations.

Towards a general strike! Down with this rotten and discredited government!

The best way to commemorate the death of Chokri Belaïd is to continue the revolution, more determined than ever, to end oppression in all its forms. Ultimately, only the mass mobilisation of workers can counteract the current downward spiral of violence by imposing a solution which can serve the majority.

The fact that the Ennahda Prime Minister, Hamadi Jebali, has announced the formation of a government supposedly composed of “apolitical technocrats” should fool nobody. It is a new attempt to prevent the masses from determining the government they want. It leaves this to technocrats handpicked and closely selected for their subservience to the current system. And the fact that this proposal was rejected by Jebali’s party indicates that the political crisis at the top of the State has reached a climax. It is time to put an end once and for all to this crumbling government, which has only violence, unemployment and misery on offer!

A general strike has been called for Friday 8 February by the UGTT, echoing the call made yesterday, Wednesday, by several opposition forces, including the Popular Front, the Republican Party, Al Massar and Nidaa Tounes, who have also announced the suspension of their participation in the National Constituent Assembly. The date of the strike is to coincide with the funeral of Belaïd.

The fact that the question of the general strike is back on the agenda for the second time in less than two months, while the last one took place in 1978, is in itself an expression of the organic crisis facing the country, and of the huge social anger that has been brewing for months on end. But two crucial remarks are necessary in this regard.

The first is that the UGTT activists and workers in general cannot rely solely on hypothetical and often very late watchwords from the top to determine what has to be done to build the struggle in the coming days. The experience of last December, when the national leadership of the UGTT arbitrarily decreed the cancellation of the general strike the night before, is still fresh in all memories.

For example, the magistrates and lawyers’ unions have already issued a statement in which they say they will be on strike for three days, the university teachers of ‘La Manouba’ are already on strike and the student union, the UGET, has begun a students’ general strike today. The regional branch of the UGTT, in Jendouba, has meanwhile decided to call a general strike in this region on Monday, 11 February.

Without further waiting, general assemblies should be convened wherever possible: in the workplaces, but also in schools, in universities, in the neighbourhoods, etc. This entails electing committees within them to take the fight in hand at all levels, so that the movement is structured around and according to the will of the masses involved in the struggle.

Discussion on the initiatives to be taken and the following-up of the strike actions must be brought up and democratically controlled from below. This can prevent a handful of union leaders concluding, behind the curtains, some deal without popular control, as has happened all too often.

If after the general strike on 8 February, the government has still not understood that it must leave the scene, an extension of the strike actions in the coming days, coupled with mass demonstrations, will be necessary to obtain a satisfactory result.

On the other hand, the support of parties like Nidaa Tounes for the general strike raises, at least, serious questions. The camp of its leader, Essebsi, is full of people with the blood of left activists on their hands, and who were complicit with the dictatorship against which Chokri Belaïd himself fought for many years.

The labour movement, the UGTT and the Left must at all costs avoid falling into the trap of a dichotomy based on the “secular” camp against the “Islamist” camp, a thesis dear to secular, but pro-capitalist parties, such as Nida Tounes. Their goal is not to defend the workers and the popular masses, but rather to better serve the interests of big business, the bankers and the imperialist powers, although with a different “colour” to that of Ennahda today.

Belaïd’s sister was correct to emphasize that Chokri was among those “on the side of the poor, the marginalized, the oppressed …” contrasting with those in the political establishment who are now trying to cynically exploit his death, reducing his character to an “enemy of Islamists”, putting aside the fact that Belaïd was also on the radical left.

In this sense, the Tunisian masses may not want to bring down the government, only so that those driven out the door two years ago can come back quietly through the window, using, in addition, the revolution and the strength of the working class as a Trojan horse. In this sense, we say: no to the plague, and no to the cholera – no Jebali and no Essebsi! Yes to a sustained mass struggle until the creation of a revolutionary government of the workers and youth, supported by the trade union movement, the left and popular organisations!

In the current context, the ‘Popular Front’ and its many activists around the country could serve as a backbone for a mass campaign with the strategic vision of establishing such a government, independent of the capitalist class, from its political parties and its so-called ‘technocrats’, and taking decisive action to put the key sectors of the Tunisian economy under the management and control of society. 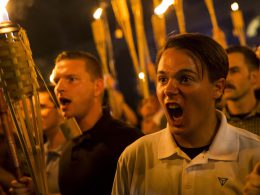 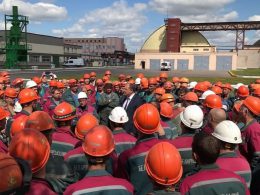 Belarus: Endgame Being Played out

With the beautiful ironic humour that usually accompanies mass uprisings and revolutions, a video has appeared of Alexandr Lukashenko driving a salon car being chased by a huge mining dump truck, clearly about to crush the car, symbolizing how quickly the mass movement is catching up to crush him and his rule. The workers from the ‘Belaz’ factory that makes the dump truck are amongst those that have walked out on strike.