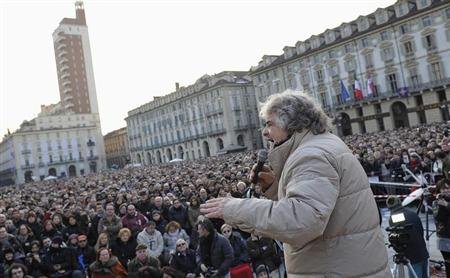 The “Tsunami tour” was the name comedian Beppe Grillo gave to his election meetings which filled piazzas throughout the country with tens of thousands of ‘spectators’. Now an electoral tsunami has well and truly rocked the Italian political system with Grillo’s 5 Star Movement, which did not exist at the last election, becoming the biggest single party in the lower house with more than 25% of the vote. Another 25% of the electorate stayed at home, the highest ever post-war abstention rate.

The outcome of the election on 24 and 25 February is political gridlock. No party or list having an overall majority and the possibility of fresh elections quite soon. The opinion polls had predicted a victory for the Democratic Party (PD) in the lower house and most commentators expected an alliance of the PD in the senate with the electoral coalition of the outgoing (unelected) prime minister, Mario Monti. However, the polls vastly underestimated support for the 5 Star Movement and also for Berlusconi’s PDL, which, on the basis of populist programmes, tapped into deep and widespread anti-austerity and anti-political establishment feelings.

Just 120,000 votes separated the PD camp from that of the PDL in the lower house (Camera). The Centre-Left got 29.5% to the Centre-Right 29.2% but the PD lost nearly 4 million votes compared with the last election and the PDL 6 million! Even though the PD as the ‘winning’ party will receive bonus seats to give it a majority in the Camera, it cannot reach a majority in both houses of parliament, even in alliance with Monti.

Grillo has ruled out any alliances and a ‘grand coalition’ – embracing Bersani (PD leader) and Berlusconi – although not impossible, could be politically suicidal for the PD. The ‘technocratic government’ card has already been played with the Monti government, so the most likely perspective now seems to be a period of political crisis leading eventually to another election, possibly after a change in the electoral law, in which the support for the ‘Grillinis’ could grow even further.

The “worst result possible” was how the Wall St Journal described the election outcome. The repercussions will reverberate far beyond Italy. The day after the election, falls on the Milan stock exchange were so great that trading was temporarily suspended. At the same time the spread (difference between interest rates on Italian and German bonds) began to increase, raising once again the prospect of market turmoil in Europe. The fate of the Euro could eventually be decided not in Greece but in Italy.
‘NO’ to austerity

The election results were an overwhelming rejection of Monti’s austerity policies of public spending cuts, tax increases and attacks on workers’ rights. Monti had been dubbed the ‘saviour of Italy’ when he replaced Berlusconi in November 2011 and the markets began to stabilise after months of instability and crisis. In these elections he was the candidate of Brussels, of Merkel and of a section of the Italian capitalist class. They were fearful that a PD government with an overall majority would come under pressure from workers and unions to ditch or water down the austerity policies they had supported under Monti. A PD/Monti coalition was considered the safest option for continuing the ‘Monti agenda’. This strategy failed dismally with Monti’s alliance receiving just 10.5% in the Camera. Before the elections Monti’s personal ratings had been higher than all the party leaders but this was precisely because he was a ‘technocrat’ and not part of the despised political class. Once he became “one of them”, his days were numbered.

Grillo and the 5 Star Movement were the real winners. His slogan “tutti a casa” (send them all packing) summed up the absolute disgust and contempt which ordinary Italians have for politicians, establishment parties and an entire rotten political system mired in corruption, scandals and self-enrichment while working people are called on to make more and more sacrifices.
Scandals

Reports of the huge cover up and fraud at Italy’s third biggest bank, Monti dei Paschi, exploded during the election campaign, tainting the PD, who have been historically closely linked with the management of the bank. It reinforced the deep-rooted feeling that the whole system stinks. Every day pages of the press were devoted to stories of politicians receiving kick backs for economic favours, of public funds being creamed off to fund lavish lifestyles and of company directors (including the director of one of Italy’s biggest and most prestigious companies, Finmeccanica) being arrested for fraud and corruption.

The Grillo votes came from across the political spectrum – from the right, from the left and from those with no political affiliation. “I want to give them all a kick up the arse!” was how one voter explained her choice, summing up the mood of many of those who voted for the 5 Star Movement. In the piazzas, Grillo shouted populist slogans and sound-bites about curbing the power and privileges of the political ‘cast’, about a ‘citizen’s income’, a referendum on the Euro, a shorter working week, nationalising the banks, and about improving the environment, all of which struck a chord with those who have had enough of cuts and corruption.

There are enormous illusions in the ability of the Grillinis to shake the system up. In reality, the Movement (Grillo refuses to call it a party) has no worked-out programme capable of solving the day-to-day problems of unemployment, low wages, and declining public services which most ordinary Italians are concerned with. It has no real roots in the workplaces or communities, organising principally via the Internet and social media. Grillo himself decides policies and tactics in an ad hoc, off-the-cuff way with no explanation or understanding of how those policies could actually be implemented in practice. His ‘rants’ are confused and inconsistent.

Grillo has an ambiguous position with regards to the far-right and immigration. During the campaign he spoke of “eliminating” trade unions although he has also made a distinction between CGIL, CISL and UIL on the one hand and the more combatative FIOM and unions of the base. At a certain stage the limitations and contradictions of the Movement will become clear, ripping it apart. It is likely to disappear as quickly as it has arisen; but for the moment, in the absence of a left-wing, anti-capitalist alternative, it has become the main vehicle for expressing the anger, frustration and disaffection of millions of Italians and its support could grow even more.

These elections took place against the background of the longest recession in Italy in the post war period. GDP has declined 7% since the economic crisis began. Unemployment has doubled and more than 37% of young people are now without work. Devastated by rising taxes and declining wages, the average family’s real income is at the same level as it was 27 years ago. Yet with working and middle class people desperate for an end to austerity, the PD were offering a continuation of the Monti agenda with just a few ‘modifications’. They pledged to respect the fiscal compact and balance the budget even though this would entail cuts of 45 billion euros every year. This is behind the massive fall of 11% in their ratings towards the end of the campaign.

Berlusconi, on the other hand, was astute enough to understand how supporting Monti’s tax increases and cuts agenda was undermining his electoral base and so he pulled the plug on the Monti government, waging a populist anti-austerity, anti- Europe, pro-tax-cutting election campaign. This included sending a mock-up tax demand to every home pledging to reimburse every penny that people had paid out when Monti reintroduced the IMU household tax. On the basis of this campaign the ‘mummy’, as one French newspaper dubbed Berlusconi, rose like Lazarus from the dead; his PDL alliance clawed back 15 points in support and ended up neck and neck with the PD.

What little remains of the Left was electorally crushed. Nichi Vendola’s SEL (Left Ecology Freedom) party, which was allied with the PD, got just 3.2%. Had the party stood alone it would have failed to cross the 4% threshold and would have had no seats in parliament. This was ultimately the fate of Rivoluzione Civile, the heterogeneous electoral list headed by the former magistrate, Antonio Ingroia.
New force needed

Instead of standing on a clear anti-capitalist/workers’ list, Rifondazione Comunista (PRC), once a semi-mass workers’ party, dissolved itself into Rivoluzione Civile on a vaguely reformist/liberal platform. This was an opportunist move, undemocratically imposed from above in a desperate attempt to get back into parliament. The PRC lost all of their MPs five years ago after entering into a coalition government with the pro-capitalist PD. After every electoral defeat, the PRC leadership, rather than looking to increase its support by involving itself in struggles in the workplaces and in local communities, has sought a new unprincipled electoral alliance, and every time its vote has plummeted. Rivoluzione Civile won just 2.2% of the vote meaning no seats at all..

The unprecedented support for Beppe Grillo can only be understood in the tragic context of the collapse of the Italian Left. But now an entirely new political landscape is emerging. The anger of working class people has exploded in the ballot box rather than on the streets and in the workplaces, but continuing crisis and instability will see the development of new mass struggles.

At a certain stage the inadequacy of the 5 Star Movement will be exposed leaving millions looking for another alternative and opening up huge possibilities for the building of a new mass political force based not on confused populism but on the movements of workers and young people, offering a real solution to the problems of working people by challenging not only the politicians but the economic roots of the whole rotten capitalist system. 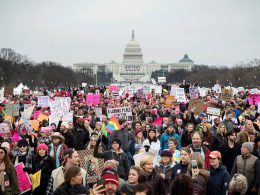 Where now for Libya after the downfall of Gaddafi’s regime? 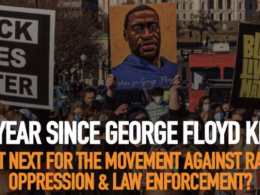