Report from Solidarity Against Repression in China and Hong Kong (ISA)

China’s dictator Xi Jinping has launched no fewer than 14 different crackdowns this year. There is a crackdown on LGBTQ people and a ban on “sissy boy” pop stars and celebrities in the media. LGBTQ online groups and websites are banned and some universities are compiling registers of gay students. Homosexuality is effectively criminalized again.

There is a crackdown on private education companies, on computer games, on learning English in schools. There is a crackdown on the big tech companies like Alibaba, Tencent and TikTok owner ByteDance. This has wiped out around three trillion dollars from Chinese stocks this year. Xi has also criticized “excessive income” and said that billionaires have to “give back” to society.

Xi’s new populist turn has alarmed some capitalist commentators. The Financial Times asks the question is China becoming “uninvestable”? George Soros says Xi Jinping is turning to Maoism. Also, some pseudo-lefts are excited by Xi’s new policies. Those who defend the Chinese regime’s totalitarian policies in Xinjiang and Hong Kong see the latest policies as vindication that Xi Jinping’s regime stands for “socialism”.

But this is not socialism or anti-capitalism. It is not left populism, but right-wing populism. Xi wants to save Chinese capitalism and his own dictatorship. Other capitalist governments — most clearly Biden in the US — are imposing tighter regulation and higher taxes on big companies. They are abandoning rigid neoliberal policies because of the terrible crisis of the capitalist system. In China, the CCP (so-called Communist Party) uses the method of crackdowns and stronger government control to achieve a similar outcome.

What is “common prosperity”?

Xi’s slogan of “common prosperity” is not socialist or communist. This is actually a Confucian concept. “Common prosperity” was the program of Sun Yat-sen’s Kuomintang one hundred years ago. Socialists stress the need to overthrow the power of capital and to establish democratic working class control over the economy.

Xi Jinping stresses that his policies do not mean “killing the rich to help the poor”. Xi’s loyal lieutenant Vice Premier Liu He has made reassuring statements in recent days that the CCP regime maintains an “unwavering commitment” to private companies and this “will not change”.

Xi’s regime is walking a fine line to defend its state-guided form of capitalism by taking measures against some sections of the capitalist class that have amassed too much power — such as the tech moguls Jack Ma of Alibaba and Pony Ma of Tencent — and at the same time using populist rhetoric to placate growing mass discontent over falling living standards, spiralling costs and shocking inequality.

China has more billionaires (measured in US dollars) than the US by a country mile: 1,058 in China compared to 696 in the US . The richest one percent of Chinese (14 million people) own more than the poorest 50 percent of the population (700 million people). This is the result of the ultra-capitalist policies of the Communist Party.

Xi’s campaign combines some populist attacks on big private companies, wealthy celebrities, and parasitic sectors like the private tutoring industry, with right-wing homophobic, anti-feminist and ultra-nationalist propaganda. Homosexuality and “effeminate” men are Western ideas and trends that harm China, according to the government.

Anti-Western nationalism is a key ingredient in all government pronouncements to gear society up for a prolonged and withering struggle in the new imperialist Cold War, in which the US and China are fighting for the number one spot.

Likewise, the democratic struggle in Hong Kong is a Western conspiracy. Beijing has vowed to crush the “unpatriotic elements” in Hong Kong with brutal repression. In Hong Kong, trade unions are effectively smashed and their leaders are in prison. As in mainland China, workers’ rights are being ruthlessly suppressed to realise capitalist “stability”.

Why is Xi Jinping doing this? The answer is that Chinese capitalism like capitalism globally faces a serious crisis — actually not one, but many. China is experiencing a population crisis, which is much worse than even the government statistics show. The birth rate has fallen sharply. Last year, twice as many children were born in India (24m) than in China (12m) while these countries have roughly the same population.

There is a debt crisis, heavily connected to China’s property bubble. One of the country’s biggest property conglomerates Evergrande is now bankrupt with over US$300 billion in debts. That’s more debt than most countries have built up. Whether the government will rescue Evergrande or allow it to fold is a question spooking financial markets. And Evergrande is not alone, there are more potentially big corporate failures in the queue.

Housing in China is unaffordable even for many middle-class people. The average cost of an apartment in mega-city Shenzhen is 44 times the city’s average yearly salary. The comparable ratio in Los Angeles is 9.6 times and in New York, 5.4 times.

The cost of housing and education are major reasons why Chinese people can’t afford to have children. This is caused by capitalism and its speculation in property prices. And the downsizing of public services. A government survey shows that a big majority of Chinese families spend one-third of their income on their children’s education.

The crackdown on private education companies and also on children playing online computer games is a populist pitch to parents, to show the government is acting. But these measures, while squeezing some sections of the capitalist class fail to address the deep structural problems in the education system which impose such a big financial burden on ordinary families.

To address the population crisis, Xi announced a three-child policy in May, allowing each family three children whereas five years ago the limit was one child. But the government miscalculated. The three-child policy met with a very frosty public reception. For many it just confirmed the government is completely out of touch and doesn’t understand the terrible pressures on ordinary households.

But Xi’s regime is also now scapegoating “Western-inspired homosexuality” and the erosion of “traditional family values” for the decline in the birth rate. A recent court case ruled in favour of a school textbook that designates homosexuality as a “mental disorder” which was the government’s official position until 2001.

The economy is also in crisis. China’s economy contracted in July, showing the post-pandemic recovery is already running out of gas. A debt-and-population crunch could push China into a Japanese scenario. Japan’s economy today is the same size as it was in 1995.

Another crisis for Xi’s regime is the US-China Cold War. Within China’s ruling class there is growing restlessness that they are losing. US anti-China policies, especially the sales and supply bans against dozens of Chinese tech companies, are inflicting real pain.

The biggest crisis for Xi Jinping is the growing discontent of workers, young people and increasingly also China’s middle-class. These factors explain the new populist policies. Xi Jinping wants to secure his coronation as dictator-for-life at a key congress in November 2022. He is desperate to build up his regime’s support for this event.

This can mean even more repression and attacks on workers’ strikes, Hong Kong activists, Uighur Muslims in Xinjiang, LGBTQ people and feminists in China.

This is why Chinese socialists are appealing for solidarity and support from worker activists internationally.Solidarity Against Repression in China and Hong Kong is a campaign that aims to organise such solidarity.

You can find the campaign here: 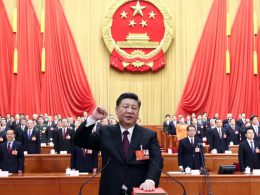 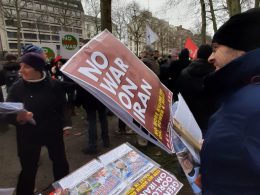 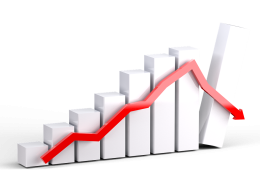