The butcher of Sabra and Shatila has died. Ariel Sharon, once known as the “Father of Israeli settlements”, died after eight years in a semi-coma, following a stroke while still prime minister in January 2006.

Many former and present capitalist leaders around the world have expressed sympathies, grief and even admiration for this former Israeli general and politician.

Along with many in the mainstream media outside the Arab world, they’re attempting to whitewash, rewrite history and rebrand the record of a war criminal as a brave combatant for peace.

“He was a warrior for the ages and a partner in seeking security for the Holy Land and a better, peaceful Middle East”, said George W Bush.

British Prime Minister David Cameron stated that “as prime minister he took brave and controversial decisions in pursuit of peace, before he was so tragically incapacitated”.

A heavy Thatcherite, Sharon’s governments pursued aggressive neoliberal measures, repressed workers’ strikes and were directly responsible for a sharp rise in poverty in Israeli society. One third of children still live under the poverty line.

Sharon’s life story encompasses quite a few of the Israeli regime’s most horrendous crimes against the Palestinian people.

He took part in the 1948 Israeli-Arab war as a platoon commander, participating in the subduing of the armed resistance in Lod and Ramla.

Hundreds of residents were killed and tens of thousands were uprooted as part of the ethnic cleansing that became known as the Palestinian Nakba (catastrophe).

Over 60 Palestinians were killed in the West Bank’s Qibya village massacre of 1953, when Sharon led the infamous 101 Israel Defence Forces (IDF) unit to inflict “maximum life damage” against the residents.

As a Major-General (Aluf) on the eve of the 1967 war of occupation, Sharon became impatient with the delay in the government’s decision to launch the war, so he proposed consideration of a military coup in order to do so without governmental consent.

After the war, as the head of the Southern Command, he led brutal onslaughts against the residents of Gaza.

Later, as one of the founders of the ruling right-wing Likud party, he became one of the most prominent advocates of the Israeli settlements colonial project in the new occupied territories.

But probably one of the most well-known massacres linked to Sharon was Sabra and Shatila in Beirut, Lebanon in 1982.

Hundreds, if not more, of Palestinian refugees and Lebanese Shi’ite residents were slaughtered for a day and a half by the fanatic Christian Phalanges.

The area was under Israeli occupation and IDF forces authorised the entrance of the Phalanges, lighting the area with flares and preventing begging residents from escaping.

Reports from the scene of mass murder reached Sharon, then security minister, and he allowed the Phalanges to finish their death frenzy.

Sharon was the mastermind of that war of occupation, aimed at crushing Palestinian militias and exploiting the Lebanese civil war in order to install a puppet Christian regime and enforce a “peace agreement” with Israel. He even deceived the government about the scale of the invasion.

The Sabra and Shatila massacre had ignited the largest anti-war movement in Israel’s history. Hundreds of thousands protested for the investigation of those responsible, for the withdrawal of IDF forces from Lebanon and for the resignation of Sharon and Prime Minister Menahem Begin.

Soldiers at the front converted a children’s song into a protest song against being used as cannon-fodder for Sharon’s imperialist plans: “Airplane come down to us, Fly us off to Lebanon, We will fight for Sharon, And return in a coffin”.

In December 1987, in the very first days of the First Intifada, a mass uprising against the occupation, Sharon held a provocative housewarming party at his newly bought second house, in the heart of the Muslim Quarter of occupied East Jerusalem.

Thirteen years later, his provocative climb to the Temple Mount became the trigger to the Second Intifada, the rebellion against the deceit of the Olso “peace process”.

On the back of a nurtured reactionary nationalist wave in Israeli society, he was propelled to the position of prime minister in 2001.

He was entrusted by the Israeli ruling elite with waging two wars – a bloody military campaign against the Palestinians and a class war against the Israeli working class. And he fought those wars mercilessly.

Attempting different tactics, he eventually moved, after a series of horrible suicide-bombings in Israeli cities in 2002, to escalate the war against the Palestinians, with the complete re-occupation of all population centres under the Palestinian Authority.

About 500 Palestinians, and 29 Israeli soldiers, were killed in that “Operation Defensive Shield”.

Shortly afterwards, Sharon’s government used the suicide-bombings as a pretext to construct the gigantic Separation Barrier of concrete wall and fences which stretches over hundreds of kilometres today inside the West Bank.

Towards the end of the Second Intifada, the Palestinian leader Yasser Arafat fell ill and died in 2004, most probably as a result of assassination by the Israeli secret services under Sharon’s government, as recent evidence implies.

At that time, Sharon’s “Disengagement Plan” was in full-swing. That move was far from a “pursuit for peace”.

Behind the plan to dismantle settlements and military bases in the Gaza Strip was a combination of the Israeli regime’s demographic worries (that Palestinian population growth under Israeli rule would lead the Israeli-Jewish population to become a minority) and its understanding that the Palestinians would inevitably re-take the route of struggle against the occupation again and again.

Sharon expressed these fears of the ruling elite when he stated regarding the occupation in 2003 that: “We need to be freed from controlling 3.5 million Palestinians who are reproducing”.

The settlers’ movement, and its ideology of “Greater Israel”, suffered a blow with the 2005 “unilateral” pull-out from Gaza.

At the peak of the war in 2002, Sharon had declared that he would not evacuate settlements and that “the fate of Netzarim (former Israeli settlement in the heart of the Gaza Strip) is as the fate of Tel-Aviv”.

But it was a strategic compromise move intended to refortify the Israeli occupation and other settlements, and prepared the ground for a step-up of brutal measures against the Palestinians in the Gaza Strip, which was turned into a giant open-air prison.

This was graphically demonstrated with the siege policies and horrific rounds of massacres, in the Gaza War of 2008-09, and the 2012 “Operation Pillar of Cloud”.

Eight years after he fell into his semi-coma, many representatives of the Israeli ruling class seem to be trying to summon Sharon’s spirit.

During his time as prime minister, a few corruption investigations were held against him, but the Israeli mainstream media worked consciously to protect him from public criticism.

Sharon has been rebranded and marketed as a strong leader of the nation, a sort of parliamentary Bonapartist, striving for peace.

His later split from the Likud and the setting up of the Kadima party was relied upon by a large camp of the Israeli ruling class to allow them to lead a similar plan in the West Bank.

The post-Sharon Kadima won the 2006 election with such a promise, and led two new wars on Lebanon and Gaza. Fearing a Hamas-controlled West Bank, they abandoned the “unilateral” strategy.

The invoking of Sharon is used by some in the Israeli establishment and internationally to put pressure on the Netanyahu government to take “tough decisions” in the negotiations farce with the Palestinian Authority.

In the post-Arab Spring Middle East, with their demographic worries unresolved, and on the background of mounting anger among Palestinians as well as widening international isolation of Israel, the ruling class of Israel is highly frustrated with its present government. But a corrupt butcher like Sharon wouldn’t have solved their problems.

With receding support for Israeli settlements, a new generation of Israeli workers and youth, striving for social justice and peace, will have to move to fight against the occupation, oppression, discrimination and expropriation of the Palestinians.

These struggles, along with the building of strong socialist forces in Israel and the occupied territories, would wreck the venomous legacy left by Sharon. 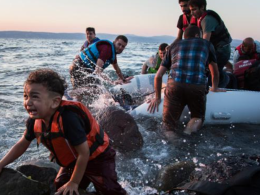 The Greek people have spoken clearly by giving Syriza such a massive vote. They have rejected the horror…
byArchive