The two largest trade unions here – Unite and NIPSA – are holding important conferences in late May and early June which present an opportunity to rebuild meaningful industrial resistance to the austerity policies of the Tories and the Stormont Assembly.

The two largest trade unions here – Unite and NIPSA – are holding important conferences in late May and early June which present an opportunity to rebuild meaningful industrial resistance to the austerity policies of the Tories and the Stormont Assembly.

The need for such a fightback will be clear to all rank-and-file trade unionists. Real pay has fallen significantly across the board. Alongside the ‘welfare reform’ agreed to by the DUP and Sinn Féin, this has caused poverty to rise dramatically. Mass destruction of manufacturing jobs has delivered devastating blows to communities. Thousands of jobs have been cut across the public sector, leaving vital services at breaking point and staff under unbearable pressure.

Unfortunately, two important opportunities to build mass opposition to austerity have already been squandered. The UK-wide strike to defend pensions on 30th November 2011 and the local strike against the Stormont House austerity on 13th March 2015 both saw tens of thousands of public sector workers here take action. These strikes demonstrated the power of the organised working class. Unite and NIPSA – then under the leadership of the Broad Left, in which Socialist Party members participate – played a pivotal role in pushing for these actions and making them a success. Unfortunately, on both occasions, the majority of trade union leaders then rolled over and swallowed the cuts with barely a hint of a concession.

Why did this happen? Many trade union leaders have abandoned the idea of workers fighting for their interests through determined industrial action when necessary, preferring instead a ‘social partnership’ with bosses and politicians, focussed entirely on lobbying.  Locally, many union leaders believe this means cosying up to the ‘progressive’ nationalist parties, despite their record of dutifully implementing austerity. In reality, some wholeheartedly support their divisive agenda. This approach is dangerous and can threaten to split the union movement along sectarian lines.

These false starts have undoubtedly left a sour taste in the mouths of many workers. Understandably, they have little faith that their union leaders have any determination or strategy to really fight austerity. Since March 2015, there have been successful campaigns to defend public services, although they have largely came from outside the official structures of the trade unions. Individual groups of workers – such as teachers currently fighting for a pay-rise – have bravely taken action, but they have been left isolated by the broader movement.

Now, another opportunity is posed. At NIPSA’s June conference, the Broad Left will again assume a majority on the union’s General Council after a year of ineffective right-wing ‘leadership’. Len McCluskey’s defeat of Gerard Coyne in Unite’s General Secretary election has kept the door open to a fighting approach, while motion 21 to the union’s Irish Policy Conference in Belfast – put forward by Socialist Party members on the Belfast Area Activists Committee – calls for the union to re-develop ‘meaningful opposition to austerity’ through ‘co-ordinated strike action across the public sector and involving, where possible, private sector workers in dispute with their employers’. If this motion is passed, shop-floor activists must organise to ensure it becomes a reality. Activists across the union movement must demand the mistakes of the past are not repeated. We cannot afford another false dawn.

However, an industrial campaign should be only one strand of the working class fightback. We also need a political voice. Recent months have shown how the Green and Orange parties while whip up division in order to distract from their austerity, corruption and backward social policies. This was made easier by the lack of resistance to Stormont austerity, but also the absence of a mass, cross-community party which fights for the 99%.

Unite is affiliated to the British Labour Party, which has adopted its most radical manifesto in decades under Corbyn. The rapid growth of Labour in Northern Ireland under his leadership shows the potential which exists, although the party still bars candidates from standing for election here. Last year’s NIPSA Conference saw a majority vote to create a political fund, although it failed to reach the two-thirds quota required for a constitutional amendment. This question will again be posed at this year’s conference. A discussion on how to build an anti-sectarian, political alternative for the working class is urgently required. Combined with an industrial fightback, this could turn the tide against austerity, as well as the sectarian status quo. 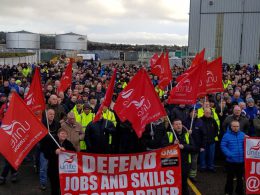 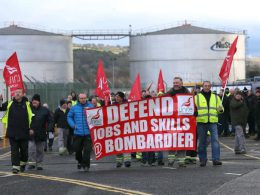 How can we stop austerity?

Below we reprint this article by Hannah Sell, Socialist Party England and Wales deputy general secretary. Hannah will…
byArchive