Exaggerated claims of pay rises of up to 15.5% proved false, with the highest around 5 – 7%. These were only achieved with consolidation of pay scales to bring the lowest paid workers up to the ‘national living wage’. Over 70% of workers received only 1.5%, while a large section of workers are forced to wait seven years for an incremental increase depending on where they are on the pay scale!

Britain. A worker in Scotland is on average £2,000 better off than their colleagues in Northern Ireland.  The victory of the Irish Nurses’ and Midwives’ Organisation (INMO) strike in the South has had a big impact on health workers in the North, giving a glimpse of what can be achieved with an enthusiastic and militant campaign.  The Royal College of Nursing (RCN) has responded to this pressure with a number of consultative meetings.  At the Belfast meeting, the anger from members was palatable, with an overwhelming demand for strike action on pay and patient safety.

Pay discussions between trade unions and the Department of Health will recommence over June.  The RCN and Unison have stated that, unless pay parity is achieved, they will be balloting for industrial action, including strike action.  However, it has been mooted that parity could be achieved if workers accept cuts to terms and conditions under the Agenda for Change Refresh Agreement.

This is unacceptable; there can be no trade off of hard fought for rights just to have the same wages as workers across Britain! Our unions must demand pay parity with Scotland with no strings attached.  This should be linked to a campaign against the austerity and privatisation that has created the current health crisis, fully supported by all the main Assembly parties.  This is a battle we can win if unions’ co-ordinate a programme of rolling and escalating joint strike action, along with major public demonstrations to pressure Stormont civil servants and the Westminster government.

NIPSA trade union members in the Northern Ireland Civil Service (NICS) have been expressing their anger at the recent announcement of a derisory 1.25% pay offer. Other public sector workers, like NI Audit Office staff, were offered 2.7 to 4% and Scottish Civil Servants got 4% pay rises. This paltry offer was only made nine months after negotiations should have concluded. The delay was indicative of the disdain in which NICS senior management hold their staff.

As word was spreading that negotiations had stalled, impromptu protests were seeing strong support outside civil service buildings. The flagship NICS Live event at the Waterfront Hall was targeted by protesting civil servants. The Department of Finance’s permanent secretary was diverted away from visiting Boaz House in Omagh when staff turned out at short notice for a pay protest.

The anger is palpable. NIPSA’s Civil Service Executive unanimously recommended rejection of the offer and began preparations for a strike ballot. Branch meetings across Northern Ireland are endorsing this approach. Members are fed up of working two jobs, of relying on benefits or family handouts, of living on overdrafts. An additional factor is undoubtedly NICS management moving to open advertisement of jobs previously filled by promotion competitions without due and proper consultation with NIPSA.

Civil servants feel their employers are taking their goodwill for granted. Following thousands of redundancies, they’re being told work harder for less pay; to accept more responsibility with less opportunity. The NICS senior management board have embarked on a confrontational course. They will be met by a determined response by NIPSA members, with a ballot for strike action seeming certain.

After Lyra McKee's killing: How can we overcome sectarianism? 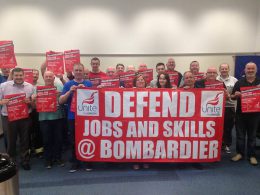 32 workers in Co. Cork have won support from thousands of people around Ireland and internationally for their occupation of the Vita Cortex plant which began on 16 December.