CWU Conference 2012 Over 22nd-26th April delegates and observers from across Britain and Northern Ireland gathered in Bournemouth for the annual Communication Workers Union Conference.

The conference was held only a few days after a contentious BT pay deal and during the announcement that the UK had entered into recession.

The main discussions focused on mental health as a workplace issue, public sector cuts and the anti-trade union laws. An important debate took place over supporting the Labour Party. A delegate from the Newcastle branch spoke of the madness of financially supporting a local election Labour candidate but being unable to do likewise for a Trade Union and Socialist Coalition candidate in a different ward who has worked tirelessly as a CWU member in the union.

At the Telecom’s side of the union, Conference discussed the results of a survey of +23,000 members which demonstrated a huge anger and fear of BT’s performance management system which could cost thousands of members’ jobs.

Just days before conference, pay negotiations with BT, triggered by inflation hitting 5.2% in Nov 2011, resulted in a one-off offer of £250. This was accepted by the union executive without a membership ballot and presented as a fait accompli. A number of delegates spoke of their anger at BT taking 6 months to make an offer and vented their frustration with the Telecom’s Executive which had launched no immediate fight against management for a better deal.

The Postal section of the union faces the question of continuing to support a Workfare-based scheme. Although the union negotiated better terms and conditions including the right to join the union it didn’t succeed in guaranteeing a job at the end. There was complete hostility from all sections of the union to slave labour schemes but there was heated debate on how the trade union movement should deal with it – negotiate to make it better or refuse to deal with it and risk it going ahead anyway. What this brought to the surface was how the trade union movement as a whole needs to be fighting for real jobs with employment and trade union rights from day one in opposition to a multi-tiered workforce. This debate in a nutshell is the debate we face: jobs and a secure future or austerity and depression. It is clear the trade union movement needs to be taking the lead against capitalism not making excuses for it. 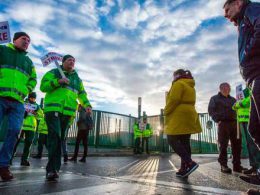 Thanks for talking to The Socialist, Tony. On the 31 May we saw the seventh day of strike action of…
bySocialist Party