This morning, Metro bus drivers in Belfast – members of Unite and GMB – staged a walk-out in response to the unjustified suspension of one of their colleagues.

The driver was suspended for using ‘excess force’ because the handle for a ramp on the bus broke when he tried to use it. Drivers say that this happens on a daily basis because of the lack of investment in maintenance of the vehicles. They saw this as a clear case of harassment by management.

Soon after the walkout began at 11am, the Metro system and much of the city centre was brought to a standstill. The drivers gathered at City Hall to demonstrate for their colleague’s reinstatement.

By 12.20, a Translink manager was forced to address the drivers and make a complete climb-down – the suspended driver was to be immediately reinstated. He refused to answer workers when they asked if the manager involved would be disciplined.

The Socialist Party congratulates the workers on their determined stand against bullying from the bosses. This is an excellent example of the power that workers can exert through industrial action, and an answer to the right-wing in the union movement who claim that strikes achieve nothing. 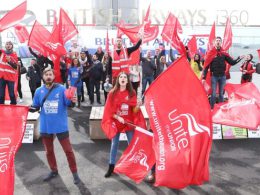 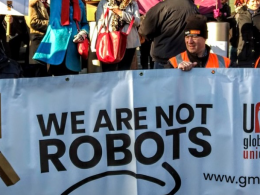 A wave of industrial action, much of it unofficial, is sweeping Amazon fulfilment centres across Britain. Workers at…
bySocialist Party
5 shares
5
0
0