For over 1,000 days, protesters have maintained a camp at Twaddell Avenue in the Woodvale are of north Belfast. The camp was established after the Parades Commission’s refusal to allow local Orange lodges to march past the Ardoyne shops when returning from the main Twelfth demonstration in 2013.

The ensuing sectarian clashes left dozens injured and the controversy has become an open sectarian sore that impacts daily on the lives of Catholics and Protestants living in the area. A recent attempt to broker a deal, which would have resulted in the Orange Order “completing” the return journey of the 2013 parade, collapsed when it was rejected by some of the local Orange lodges and elements connected to the UDA.

Conflict and controversy related to Orange parades has existed for centuries but the most recent conflicts erupted in the mid-1990s when Catholic residents in areas such as Ardoyne and the Lower Ormeau Road and the Garvaghy Road in Portadown (Drumcree) objected to what they saw as sectarian marches “through” their communities. The Socialist Party argued at the time and ever since that when it comes to resolving controversial issues such as parades that solutions must be found to prevent working class people being dragged in to open sectarian conflict.

Riots and violence surrounding the controversial parades have not only seriously disrupted people’s lives but have also resulted in many injuries, sectarian attacks and sectarian murders. The parades conflict is a manifestation of the deep sectarian divisions that still exist in Northern Ireland, divisions that have not been eradicated by the “peace process”. Instead, the polarisation in society has grown.

This is a struggle over two conflicting rights. The Orange Order is a sectarian organisation but the view that it should have no right to march is completely unreal in the concrete circumstances of Northern Ireland. But so too is the opposite view that it should be allowed to march anywhere and in any manner it chooses.

Residents also have a right to object to parades they find insulting and offensive. The only way these two rights can be reconciled is through direct negotiation between parade organisers and residents. Where marches take place through entirely residential areas, residents must have the right to say no, bearing in mind that minority viewpoints in an area need to be respected.

The Orange parade past the Ardoyne shops does not fall into this category. It is along the Crumlin Road, an arterial route by which both Catholics and Protestants get to and from their communities, which sit side by side. The Ardoyne shops are used by both Protestant and Catholic residents. However the opposition to the parade from Catholic residents in the Ardoyne reflects decades of sectarian conflict and this dispute can only be resolved through dialogue with neither side holding a veto.

Parades Commission rulings only exacerbate the problem. Face to face negotiations between residents and marchers to decide who marches and the general conduct of the parade is the only way to resolve the conflict in Ardoyne/Woodvale. Agreement could be reached on stewarding with each side stewarding their own supporters. The PSNI – whose presence tends to heighten tensions – should not be involved, and there should be no curfews.

The vast majority of working-class people don’t support or want the conflict and sectarianism that surrounds these conflicted parades. Dialogue and compromise by both sides are the only way forward. 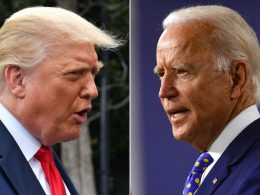 2020 is not the election year that anyone expected. Presidential election politics are now utterly intertwined with the global pandemic that has killed nearly 165,000 people in the U.S. as of this writing and has completely altered life for most of the population.