Even as the votes in yesterday’s Referendum are being counted to determine whether it’s ‘Yes’ or ‘No’ to the Fiscal/Austerity Treaty , attention will already be moving to the immediate and medium term future of the Eurozone and the fate of the millions of people in its economically beleaguered periphery. History may well show that the treaty itself was an almost irrelevant distraction from an honest appraisal of the cataclysmic problems that bedevil the currency union as all the contradictions in its economic and financial systems assert themselves with a vengeance.

Certainly it was near impossible to get a debate going on such an appraisal during the treaty campaign. The vast bulk of the printed media was stridently campaigning for a ‘Yes’ vote and that reflected itself in the attitudes of many operating within the broadcast sector. The media focus, reflecting the government’s fear campaign, was almost exclusively on the question of where the government could source emergency funding in 2014 if the financial markets were closed off.

A real debate in the course of this campaign would have broadened out into putting the funding issue into context. Why would it be that, after three years of austerity, with the Irish people’s living standards and public services ruthlessly squeezed to pay the gambling debts of developers and bankers arising from speculation in the property bubble, there should be a need for another ‘programme’? Why should there be talk of an ongoing black hole to fill, in the form of a current budget deficit for 2014 and 2015? Was this not a graphic admission of a complete failure of austerity to bring about a recovery of the domestic economy and should there not have been a very serious discussion on this during the campaign?

Unfortunately, with both media interrogators and commentators, as well as political proponents of the treaty, screaming at opponents as to ‘where they would find the money’ and refusing to engage in any kind of meaningful wider discussion, these questions were crowded out. However these are the key issues that should now take centre stage.

Among the most dishonest of the claims from the ‘Yes’ campaign was that the Treaty would bring ‘stability’ and ‘certainty’ to the Eurozone and to this State. They postured as if they were the ones in control of events and could ensure this. In fact they are hapless bystanders at the mercy of those who really dictate events. They are the players in the financial markets, the bond speculators, the hedge fund operators and major private corporations all driven by the imperative of amassing as much private profit as possible irrespective of the consequences for society and for the hundreds of millions of ordinary Europeans.

What is crystal clear is that none of the governments throughout the Eurozone control the powerful forces which control the levers of economic power in a capitalist society. It is the imperative of these forces to serve the interests of small elites, that is now resulting in major crises for society as a whole.

An article in The Wall St. Journal on March 24 entitled, ‘Firms cash hoarding stunts Europe’, illustrate the contradictions within this system. Simon Tilford, chief economist at a think tank called, ‘Centre for European Reform’, is quoted, pointing out that ‘ the ratio of investment to gross domestic product in Europe is at a 60-year low even as companies pile on cash. Corporate cash holdings are now €2 Trillion across the Eurozone and an extraordinary £750 billion Sterling in the UK.’

This is breathtaking. There are 17 million people unemployed in the Eurozone. In a rational economic system, available capital would be utilised to harness the potential of this huge army of the unemployed in developing established enterprises and creating new manufacturing and service enterprises. Instead there is a ‘strike of capital’ because the major capitalists are not convinced they can make a profit from such investment. Their ‘right’ to make profits is elevated over the needs of the millions suffering the poverty and deprivation arising from mass unemployment.

It is this logjam that leads Lynn Walsh to declare in the socialistworld.net website on May 25, ‘The Euro stands on the edge of death spiral, which could have a devastating effect on the world capitalist economy. None of the capitalist leaders wants a chaotic disintegration of the Eurozone, but none of them has any policies capable of resolving the crisis.’

But opposition to the effects of the crisis is intensifying across Europe among millions of ordinary people and seen here in the mass boycott of the new home tax. Attention should turn now to the alternative to a failing capitalist system. The Left in particular, having been shouted down when trying to put the debate in a wider context during the treaty campaign should now insist on the time and space to explain the socialist alternative.

Monarchy - not just a 'harmless relic'

In the last six years, austerity was imposed without the same level of protest as took place in…
byArchive
Read More 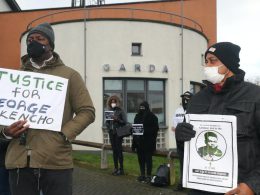 Here we reprint a statement from the Anti-Austerity Alliance on the arrest of AAA TD Paul Murphy, councillors…
byArchive