The Protection of Life During Pregnancy Bill with its in-built restrictions is on its own terms more restrictive than what the Supreme Court Ruling of 1992 and subsequent referenda would have permitted. This sabotage of the effective right to a termination even within the restrictive terms of the X judgement is a reflection of the reactionary views held by most TDs in Fine Gael, Fianna Fáil and Sinn Féin as well as an abject capitulation by the Labour Party to the pro-life reactionaries both within the Dáil as well as from the Church quarters.

Regardless of the significance being attached to this legislation by both the government and by the most virulent anti-abortion elements and the Catholic Church the plain reality is that this is not a significant step forward for women. The definition of unborn life contained within the bill and flowing from that the non-inclusion of the right to choose in the case of fatal foetal abnormality is a cruel betrayal of the advocates of the Termination for Medical Reasons (TFMR). The definition of unborn life in the Bill creates the possibility of fresh lines of attack from reactionaries on to right to IVF treatment as well as impeding stem cell research.

The memory of Savita Halappanavar has been sullied as the new legislation would not permit a timely lifesaving termination in the type of scenario that led to her death. The persistence in viewing the life of the woman as a distinct category from her health when in reality the two converge in effect means that thresholds of illness, disease, pain and suffering are to be permitted in a pregnant woman and only at the point of death coming on the agenda would treatment resulting in a termination be permitted.

The offences section of the Bill is barbaric. A raped and impregnated woman who procures an abortion outside the terms of the Bill either with the help of a sympathetic practitioner or through self-administration of an abortion pill stands to receive a sentence of more than twice of that that would be handed to a convicted rapist.

The level of consultation required for a woman who is suicidal coupled with the empowerment of anti-choice practitioners to veto such a women exercising her choice is design so that in effect few if any women in this position would seek a termination by this route.

For these reasons Socialist Party TD Joe Higgins will vote no to the Bill and the Socialist Party recommits itself to the fight for genuine choice which under this system can only be realised by first repealing the eighth amendment. This whole episode proves that it falls to ordinary women and men to fight for real social change from women’s rights to the separation of church and state as well as an end to capitalist austerity which hits women the hardest. It won’t come from the establishment parties but only through the development of a mass left secular force in Irish politics.

In the last six years, austerity was imposed without the same level of protest as took place in…
byArchive

Just over two years ago, Savita Halappanavar died in Galway after being refused an abortion. Since then several…
byArchive 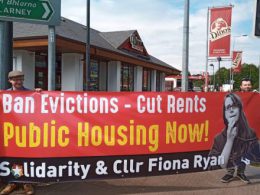