Can an institution, like a human person, suffer from schizophrenia? Judging by the latest report from the International Monetary Fund it would certainly seem so. The condition involves a ‘breakdown of thought processes’, a ‘deficit of typical emotional responses’ and ‘disorganised thinking and speech.’ All these conditions are evident in the prescriptions by the IMF for the Irish people.

The IMF is part of the infamous Troika and with its partners, the EU Commission and the European Central Bank, has been forcing a savage regime of austerity on the Irish people, forcing them to carry private losses of tens of billions of Euro for major bankers and bondholders. Draconian wage cuts for public sector workers, tens of thousands of job cuts in the public services, cruel increases in levies and taxes on ordinary people have all been central to the diktats of these three institutions.

The latest IMF report strongly advocates the implementation of the commitment emanating from a summit of EU leaders in June 2012 to the effect that bank debt should be separated out from the debts entered into by governments. This was the ‘seismic change’ that Taoiseach Enda and the governments hailed at the time, but of which we have seen nothing since.

However, while advocating some assistance for relieving the national debt pressures, the Fund wants austerity continued to be piled on the hard pressed population. It wants the savage cuts in public services and in wages continued. It has already demanded that the property tax should be two and a half times greater than the rate applied. Even more callously it is demanding a major increase of pressure on those homeowners unfortunate enough to be in difficulties with repayments on their mortgages. In essence it echoes calls from a number of sources in recent times for a sharp increase in evictions of people who are in mortgage difficulties.

The IMF is calling for a continuation of the savage austerity regime begun by Fianna Fail and continued by Fine Gael and Labour. At the same time it is warning that the economy may not recover to any significant degree in the next few years thus threatening the ability of the State to be able to borrow funds on the financial markets. This is the kind of ‘disorganised thinking’ evident in many establishment circles at the present time.

As households all over this country were receiving demands for the new home tax imposed on them courtesy of the IMF and friends, apparently a row was happening behind the scenes between the Troika and the government over the timetable for the imposition of a water tax on every home. It is said that the Troika is insisting that the government impose this new charge next year while the government had been hinting that they would be delayed until 2015 for the very cynical reason that it faces Local and European Parliament elections in the middle of next year and fears the wrath of a long suffering electorate faced with one burden after another. The humiliating defeat in Meath East haunts Labour in particular.

The IMF has not a shred of humanity in its prescriptions. Its main objective is to protect the workings of international capitalism and to push for policies such as privatisation of public enterprises for the benefit of major corporations and financial institutions. This will come as no surprise to anyone who followed the role of this organisation in the ‘Third World’ in the 1980s where its policies devastated the public sector in many poor countries as it acted as a bridgehead for Western multinationals.

Institutions like the IMF need to be demythologised and challenged by the Irish people. Where the government of Fine Gael and Labour prostrates itself at the feet of the Troika, the people should prepare to fight for a major change of policy. Otherwise there will be a ‘lost decade’ and a new ‘lost generation’ of young people forced out of their country involuntarily or condemned to ongoing unemployment within it.

The implications of a new round of severe cuts in incomes and living standards have struck home with teachers and nurses as they have done the calculations and see concretely the impact on their lives and families if they are implemented. The implications of the property tax are being brought home forcibly to people as letters drop on their mats demanding hundreds of Euro that very many do not have to give. All these burdens emanate from the same source – the criminal decision to bailout the bankers and bondholders and put their debts on our shoulders. We need to stand together in unity as people can do with the Campaign against the Property and Water Taxes in a major, national march assembling in Parnell Square, Dublin at 12.30 on Saturday, April 13.

By Joe Higgins TD    Commentators and media are already looking toward the centenary of the 1916 Rising.…
byArchive 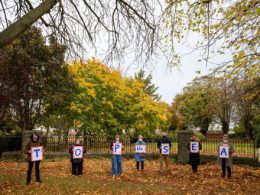