Following on from his previous statement of support for the striking Bus Eireann workers and his subsequent visits to the picket lines in Broadstone and Busaras Joe Higgins TD has submitted a request to the Ceann Comhairle for a topical issue debate to be held in the Dáil tomorrow on the dispute:

I want an opportunity tomorrow to put directly to Minister Varadkar the points that the workers on the picket line made to me about this dispute. It is undeniable that Minister Varadkar supports the wholesale privatisation of Bus Eireann and is willing to use his position in government to help engineer that end. I want to put to him directly points that were made to me about the levels of six figure executive pay in the firm, recent pay hikes these top brass have obtained and the €70 million that has been banked by CIE. It has been raised with me and party colleagues by some of the workers that the government want the company to financially sink as a prelude to selling it off.

The cut in the subsidy and the progressive promotion of private sector rivals cherry picking the more profitable routes which should remain in public hands to cross subsidise the service in more rural areas are now being used to feed a perverse narrative that the workers themselves are responsible for the financial state of the company. The narrowing of the debate down to the company deficit is typical of efforts to consciously miss the point by government, employers and right wing media.

Unlike Minister Varadkar I proceed from the starting point that Bus Eireann like the other state owned public transport companies are integral parts of a society’s infrastructure. They should no more be run on a for-profit basis that other public services and utilities. The true value of their contribution to society cannot be measured simply in revenue but in terms of their contribution to reducing traffic and mitigating damage to the environment if it was the case that all the passengers were to be reliant on cars.

There is much talk today about reopening negotiations with a view to ending the strike. There is no basis for this strike to be discontinued while the cuts imposed by Bus Eireann management yesterday remain in situ. The ballots of the other unions whose members are already observing the pickets will see likely see resounding votes for action. The pressure needs to be kept on management and the government.

By Joe Higgins TD, Since the centenary of the Great Dublin Lockout has been preoccupying us in 2013,…
byArchive

By Paul Murphy TD “The reality is that a small clique of hard-left, Trotskyite politicians, who are quite…
byArchive
Read More

Paul Murphy wins parliamentary seat as 100,000 march against water charges 12 October 2014 will be a day…
byArchive 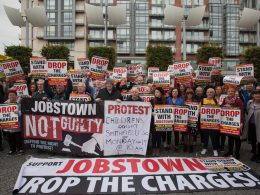