Across Europe, in the face of growing resistance at the polls and on the streets, the capitalist class is ramping up its campaign to terrify people into accepting its ongoing austerity. In the south a ‘yes’ vote in the referendum on the EU fiscal treaty is pushed by the government and the bosses. Here Michael O’Brien explains why the Socialist Party is campaigning for a no vote. For more information see the Socialist Party website www.austeritytreaty.ie for detailed arguments against the fiscal compact treaty or buy the new pamthlet from Socialist Party MEP, Paul Murphy available from the Belfast Socialist Party office(02890232962)

The ‘austerity’ treaty referendum is the dominant issue in Ireland’s news media. The treaty which involves 25 out of the 27 EU members (Britain and the Czech Republic opted out) is the latest response by the European political establishment to the sovereign debt crisis.

The background to the referendum is the growing unpopularity of the government. Opinion polls show dissatisfaction with the government has swelled to 65%. The Financial Times reports that senior government ministers have faced verbal abuse on the campaign trail. The deputy finance minister was called “a waste of space” and “just a yes man”.

But as Socialist Party TD Joe Higgins explains the establishment parties are “now holding an economic and political weapon to the heads of the Irish people to coerce them into voting ‘Yes’ to their austerity Treaty on 31 May.”

Their arguments in favour of this treaty involve a re-writing of recent economic history. Apparently, the crisis we face is at root a crisis of public spending and governments, particularly in the ‘peripheral’ countries by not having balanced budgets.

The reality of course is that this is a crisis of capitalism and the particular form in which it began was in the banking and property sectors where the lending practices of banks across Europe fuelled property bubbles particularly in countries such as Ireland and Spain.

However both Ireland and Spain had ‘balanced budgets’ before this crisis began. That has since changed because of the scale of private banking debt that has been taken on by governments.

The other side of the crisis is the collapse of private sector investment, a strike of capital which in Ireland has seen fixed capital formation decline by 65% since the crisis began raising unemployment in Ireland to 500,000 or 14% of the active population.

Carrot and stick
Like the second Lisbon Treaty referendum in 2009 the ‘Yes’ side (which apart from the government principally includes the Fianna Fáil ‘opposition’ and the employers’ organisation IBEC) is again using a combination of carrot and stick with the electorate.

Vague promises of growth, stability and jobs are promised if a yes vote is achieved. This does not wash with the public. The Socialist Party and the United Left Alliance, which the SP is part of, has pointed out that over 100,000 fewer people are at work now compared to the time of the Lisbon Treaty. The figure would be higher but for emigration.

Figures from the Central Statistics office show that more than 3,000 Irish people are leaving the country each month, the highest number since the Famine in the mid-19th century.

The absence of convincing positive reasons is acknowledged by a host of right wing economists and some opposition right wing TDs (MPs) who instead rely on the ‘stick’ argument. They say that without passing this treaty Ireland will be denied access to the only source of emergency funding available to it (the European Stabilisation Mechanism) in the event of a second bailout being required – which everybody apart from the government thinks is a near certainty.

Therefore, we are told that Ireland and the other member states who are party to this treaty must (as required by articles three and four of the treaty) implement savage additional cuts in the years ahead to bring our structural deficit to GDP ratio to 0.5%.

Ireland’s estimated structural deficit for 2013 is 3.7% necessitating an additional €6 billion in cuts according to the Unite trade union. The corresponding total scale of additional cuts across Europe to meet these targets is estimated to be some €161 billion.

Articles five and seven empower the unelected European Commission and European Council to automatically place countries in effective administration if deficit targets are exceeded. Taken together the treaty essentially seeks to enshrine austerity in the law and constitutions of the signatory countries and preclude for example any expansionary budgetary policy of government borrowing to fund job creating public works projects and reverse the economic decline.

As Socialist Party MEP Paul Murphy points out, this is a bankers’ and bondholders’ treaty. It is about putting the working people and unemployed of Europe on rations so that as much bank debt as possible is paid on the back of destroying public services, wages and working conditions.

One of the biggest ploys used by the ‘yes’ camp is to paint a picture that if the treaty is rejected then Ireland will be left isolated in Europe.

The broadcasting rules during the referendum campaign have forced the media to give 50% of time to the ‘no’ side which in the main is the Socialist Party/United Left Alliance and Sinn Féin.

Our representatives, unlike Sinn Féin, have dealt with the question of Ireland’s borrowing requirements and funding needs in 2013 and beyond by calling for a cancellation of debt servicing, implementing wealth taxes and by raising the slogan of a socialist Europe as the only means of overcoming this crisis of capitalism.

The latest opinion poll claims the ‘yes’ side is on 37%, ‘no’ 24% and ‘don’t know’ 37%. This is remarkable given the scale of scaremongering by the ‘yes’ side and the fact that they outspend the ‘no’ side by a factor of tens.

The FT accompanied Socialist Party MEP Paul Murphy as he campaigned in Dublin city centre and reported that “it is clear that working class voters are more likely to vote No than the middle classes”.

Regardless of the outcome, the experience of the household tax shows that it is one thing to pass a law or effect a constitutional change on the basis of lies, fear and deception but it is another thing entirely to actually implement the cuts. We can look forward to stiff, active and sustained resistance to austerity in Ireland and across the continent in the months and years ahead. 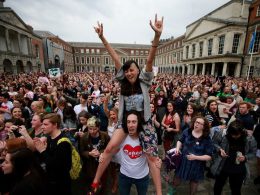 No delay can now be justified. There is nothing to stop the Dail [Irish parliament] to move quickly to enact legislation to give effect to the proposals from the Oireachtas Committee. No more people should suffer.
bySocialist Party
Read More