The Mahon Tribunal at first glance doesn’t make any dramatic new revelations. What it does do, however, is to bring back to prominence the litany of corrupt practices and crooked dealings that characterised the relationship between certain developers and numerous prominent public representatives from the Fianna Fail and Fine Gael parties.

It reminds us, in particular, of the scandals surrounding land rezonings in the greater Dublin area in the 1980s and ‘90s. It reminds us of the appalling planning decisions made as a result of this corruption which have blighted the quality of life of residents in numerous communities. And, for some of us who were Councillors at the time, it brings back memories of the exhausting and fractious meetings of Dublin County Council in the early 1990’s when we tried to stand against the tide of corrupt rezoning.

It was difficult and frustrating. At the Council HQ in O’Connell St., we spent interminable hours in a sparsely populated chamber arguing against motions to destroy green lungs and sensitive landscapes for the benefit of developers, only to be outvoted by a surge of the rest of the 72 Councillors piling in from nearby Conway’s pub intoxicated with the drink which landowners, developers and their bagmen had plied them with.

Scandalously this went on for months while the leadership of the Fianna Fail and Fine Gael parties largely stood idly by as their Councillors cheated the people of Dublin. This is probably what the Mahon Tribunal Report refers to when it says, ‘Given the existence of such rampant public corruption, the obvious question is why it was allowed to continue unabated. The short answer to that question is that it continued because nobody was prepared to do enough to stop it.’

I regret that the last phrase about ‘nobody was prepared to do enough to stop it’ isn’t qualified to say that indeed there were a few Councillors and some community activists who put themselves under huge pressure and stress in trying to stop the corruption but weren’t in a position to prove what they knew to be going on. The Report refers to a ‘series of Irish Times articles in July 1993 openly discussed the payment of money by developers to elected councillors.’ These articles make honourable mention of those who were trying to highlight and oppose the abuse.

Today the Tribunal Report needs to be looked at from the wider angle that points up the connection between the corruption and dishonesty it found and the current fate of our economy. The relationship between Fianna Fail and major players in the property development world resulted in them exercising inordinate influence to the extent where construction came to account for one fifth of the economy, an unheard of situation in any developed economy.

We now know that the projects that resulted were financed by massive loans from assorted speculators, bondholders and major European financial institutions seeking easy and quick profits from the obscene prices which the unfortunate young generation were forced to pay to meet their human need for a home.

The gigantic pyramid scheme that resulted inevitably crashed, bringing the rest of the domestic economy into crisis also.

This disaster was, and still is, magnified a hundred fold by the savage austerity that has been imposed by the capitulation of two Irish governments to the demands of the financial markets and the European political establishment that the speculators’ gigantic losses be placed on the shoulders of the Irish people. And here we return to the Household Tax.

The majority of the decent tax compliant people who have been the bedrock of finance for our society and public services are in open revolt. They understand that, if allowed to be implemented, home and water taxes will become an economic millstone which they cannot bear. They are also in revolt against the disastrous effect of the austerity policy that is driving these taxes and the Boycott is their weapon to oppose and to demand change. Out of 1,800,000 households, a massive 80% have not registered so far. By the government deadline of March 31, we are looking at an historic people’s rebellion that the government better heed. 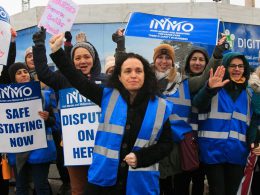 In the South, nurses and midwives have secured significant concessions on pay from the Fine Gael government, following three days of strike action. They took the action against a miserly pay deal which failed to keep up with rising living costs. For example, housing costs in the South are increasing at 11% per year! This has pushed many to seek work abroad and contributed to increasing workloads on staff. 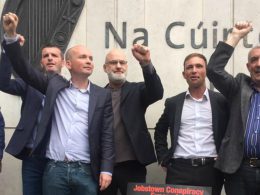