On the second anniversary of Savita Halappanavar’s tragic death, protests are taking place across Ireland as well as in Sweden, Germany, Canada, Australia and many other countries to demand abortion rights for women in Ireland.

As part of this International Day of Action we are calling on people to protest at Belfast City Hall to call on the Assembly to extend the 1967 Abortion Act to Northern Ireland immediately.

Annually over 1000 women from Northern Ireland are forced to travel to access abortion services in England or Wales – adding further strain to an already difficult situation. We demand the right to choose for women in Northern Ireland which must include access to safe, free and legal abortions here.

For more than a century, 8 March has been the day to commemorate and celebrate the fight of working class and revolutionary women for a better deal and a socialist society.Its origins are in the struggles for equal pay and decent conditions amongst women in the USA in the 19th century.

Women and the Struggle for Socialism: It doesn’t have to be like this 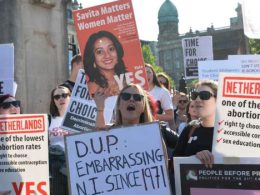