The killing of Zhina (Mahsa) Amini, a young Kurdish woman, by the “morality police” in Iran provoked a new, bold and explosive movement from below, challenging the rule of the mullahs and the regime while president Raisi is being welcomed at the UN general assembly in New York! We stand in strong solidarity with all the brave women, workers and youth risking their lives by going on the streets shouting “Death to the dictator”, “Death to the oppressor — if it’s the Shah or the religious leader” and “Women, life, freedom”. No words can describe the sadness and anger which is present in our minds and hearts. We must turn this sadness and anger into coordinated action in solidarity with our siblings in Iran, Kurdistan and the whole region. While expressing our deepest condolences to the family, relatives and friends of Zhina, we as ISA and ROSA international will help to organize and broaden this type of international protests and actions.

Zhina was beaten by the brutal agents of the regime and died after being in a coma for three days. Women in Iran are arrested and beaten on a daily basis for the way they are dressed. It is an example of brutal state violence and how it is interlinked with deep-seated misogyny and femicide. This is why the first thought of many was: this could have been me or my daughter or sister or friend. Being harassed or violated on the streets for being a woman by religious men, the “morality police” or others is a well-known experience in every public or private sphere. Once you get arrested, you never know what will happen to you. This is not the first time that women have been killed during detention or under torture. Throughout its history the murderous regime has desperately tried to cover-up these murders as heart attacks, suicides, etc. This time, however, it has led to widespread protests in various forms — from sit-ins to strike action, from demonstrations at the universities to actions in front of the police offices.

The killing of Zhina was not an accident nor the result of the mistake of individual police officers. This murder is a continuation of the systematic, mysogynisitic and repressive policies that the Islamic regime has adopted since coming to power. For more than four decades, women and oppressed groups such as Kurdish people have paid a heavy price with their bodies and lives in defense of their most basic human rights. By resisting the mandatory hijab some of them risk their lives on a regular basis, in order to demand freedom of choice over their bodies. The regime is seeking now to break the movement and the ongoing strike action. In the Kurdish regions, for instance, they have resorted to massive repression and even killings at the demonstrations. But people’s widespread and profound anger cannot be silenced at this point. Zhina’s life was taken in a situation in which the regime is in the middle of multiple crises — inflation, growing poverty and skyrocketing prices, all of which affect women even harder. The mullahs are in a deep crisis of legitimacy, risking their rule with every step, as we have seen throughout the pandemic with growing protest waves and strike actions from teachers to oil workers, from nurses to bus drivers. The people have had enough — and once again it is women, for instance Kurdish women and youth, who are at the forefront of struggle to end the rule of these islamist killers. It was always them, who took the first steps in building a movement to demand their own rights as well as liberation for the working class, leading the revolutionary movement over 40 years ago which was betrayed and stolen.

The regime is well aware of this power, trying to suppress women, LGBTQI+ and youth more brutally in recent weeks and months like we have seen with the horrific death sentence against Zahre Sedighi and Elham Choobdar. But the movement now has the potential to spread even more across the country and the whole region; as we know, women have played a key role in the recent uprisings from Lebanon to Iraq. Women are taking off their hijab, not only in Zhina’s hometown and region, but in protests that have spread to Tehran and Isfahan as well as Iraq. The security forces had threatened the family to bury their daughter at night, but they resisted and the ceremony developed into a loud protest which started this wave. On the sign of Zhina’s grave it is written in Kurdish: “Zhina, you don’t die, your name becomes a code”.

The struggle against mandatory hijab and Islamic dress codes is deeply interlinked with the struggle against the entire regime and capitalist system in Iran and internationally. As we see globally, in times of crisis the rulers need to control women’s bodies and lives even more. The Iranian regime needs the brutal oppression of women through religious laws and violence to maintain gender roles and the massive exploitation of women in the home. While western politicians, US imperialism etc. are trying to instrumentalize Zhina’s death for their own agenda it is absolutely clear that these forces cannot be trusted. Our lives and bodies are being controlled through dress codes and abortion restrictions, through the explosion of gender based violence and femicide, through poverty and hunger. Imperialist forces have thrown the whole region into war and destruction, threatening women’s lives by having contributed to the rise of right-wing islamist forces like in Afghanistan, Iraq or Syria but also through their sanctions in Iran, which are not affecting the super rich mullahs but the working class and poor, and women in particular. They are also all pandering to the rulers of the arch-reactionary Saudi regime, whose treatment of women is equally abominable — having, for example, just handed down decades-long prison sentences to women activists simply for posting their opinions on social media. These powers are not interested in real freedom and liberation of the masses. This is why it is only through the power of women, workers, all oppressed and poor in Iran and their independent action & organization that the regime can be overthrown.

To demand that Zhina’s killers get their deserved punishment we have to take on the fight against the whole regime. Fight for an end to mandatory hijab and for the right of women to wear what they want, an end to all the misogynistic rules and laws and to all forms of discrimination against oppressed groups and minorities. We need to fight for the right to protest and organize, for all political prisoners to be released. For decent lives, security, jobs and wages — independence for women in every aspect of their lives. These demands stand in sharp contrast to the agenda and necessities of the regime. We have the deep belief that these demands will be achieved with the unity, solidarity and independent struggles of the working class with women and oppressed at the forefront.

Such a struggle has the potential to take up the fight against the deep-seated sexism, violence and discrimination. The regime has always used the brutal discrimination of Kurdish people as well as other minorities to divide and rule. The Kurdish worker’s movement and the radical women’s movement and its militancy is therefore a very specific threat for them. This is why the call to strike that came from Kurdish workers organizations needs to be taken up by the whole Iranian working class movement. It needs to be broadened to build action committees in all schools, universities, workplaces and neighborhoods. To show that the Iranian workers movement cannot be separated from the struggle of all the oppressed — it is the same struggle against the same enemy. This type of solidarity is necessary to overcome national and ethnic division as well as gender based discrimination and violence. The same is true for the workers movement internationally that urgently needs to build international solidarity from below as an alternative to the hypocrisy of Western imperialism and their liberal feminism. The recent strike actions in a number of cities and regions in Iran showed the potential for a strong, democratically organized and coordinated multi-ethnic and multi-gendered working class movement which has the power to end the mullah’s rule, bring down Raisi Khamenei and the whole regime, take the whole system and economy into their own hands and fight for a democratic, socialist system to guarantee freedom, equality and bodily autonomy.

Statement on Queen's death, King's 'ascension' and the British monarchy

Kwarteng's mini-budget is a declaration of war on workers 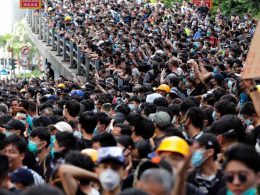 BREAKING NEWS: On August 10, after this report was published on internationalsocialist.net the HKPTU leaders formally disbanded the…
bySocialist Party 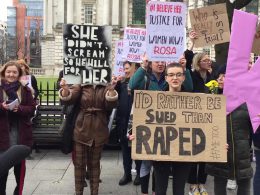 By Laura Fitzgerald Being and Being Bought: Prostitution, Surrogacy & the Split Self by Kajsa Ekis Ekman. As…
byArchive 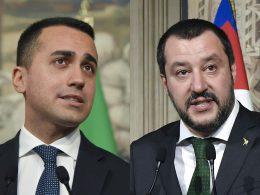 Without a clear and strong socialist alternative, the whipping up of anti-migrant sentiment by the right will continue to go unchallenged in any meaningful way. It is up to Italian socialists to build a credible party of the working class that's capable of challenging the reactionary forces. Only a movement built on working class solidarity, anti-racism and internationalism is capable of taking on the establishment and delivering a victory for working-class people.
bySocialist Party