“THESE ARE the times that try men’ souls. You will no doubt hear a greatnumber of stories respecting the situation of this country. Its present unfortunate state is entirely owing to treachery; the rich always betray the poor.”

“THESE ARE the times that try men’ souls. You will no doubt hear a great number of stories respecting the situation of this country. Its present unfortunate state is entirely owing to treachery; the rich always betray the poor.”

These were the words of Henry Joy McCracken, leader of the United Irishmen, after the failed rebellion which sought to unite “Protestant, Catholic and dissenter.” Today, we again live in trying times which demonstrate that “the rich always betray the poor.”

That is seen in countless ways, from the lack of PPE at work to the drive to end the lockdown, putting profits ahead of workers’ health. The lockdown has also shone a light on the real power that working-class people have, from the walkouts at food processing factories to the essential role played by many workers in our society who, only months ago, were dubbed ‘unskilled’.

The crisis has also revealed the role of the main parties at Stormont, who
are happy to do nothing in the face of flagrant health and safety violations,
or to allow children and parents to face the pressure of ‘transfer tests’ – archaic exams which discriminate against those from working-class background – in the autumn despite the crisis. While they have claimed to
‘rise above politics’, the sectarian fault lines between the main parties have
been exposed at times, with their instincts to follow the lead of either the
capitalist establishment in London or Dublin.

However, the crisis has also demonstrated the willingness of ordinary
people to step forward and offer solidarity. We see that in countless ways.
In every working-class community, people en masse are standing out to
clap in solidarity with frontline workers who are Protestant, Catholic and neither. Importantly, workers have also stood united together in the workplace against their bosses.

Symbolically, we have seen NHS murals and banners appear in both Protestant and Catholic communities, sometimes in place of paramilitary murals that have historically been used to mark territory. In Portadown, wood gathered for the annual Twelfth bonfire has been turned into a two -storey tribute to the NHS. For years, the state has sought in a clumsy manner to replace some of the most blatantly sectarian murals,
with hardly any lasting success. Here, we have a development organically
linked to working-class communities that gives a glimpse of what is possible, and shows that it is common struggle which can break down sectarianism.

Sectarianism won’t be challenged by abstract calls for unity. The common misery faced by working-class people will produce the basis for common struggle of workers, which ultimately can break down division.
Nationalist and Unionist parties who base themselves on sectarian division
cannot and will not overcome it. Neither will parties like Alliance, who say
they are non-sectarian but support right-wing, pro-capitalist policies
which create the social conditions in which sectarianism breeds.

This crisis has demonstrated the potential for working-class people to
come together around our common interests, as has happened many times
in the past. But we also need to build a mass, anti-sectarian political force
rooted in the organic unity of the working class, in workplaces and in
struggle.

Such a force cannot ignore or wish away the issues which divide our communities, but can demonstrate how genuine solutions can only be found when workers come together in a spirit of solidarity and mutual respect. Crucially, the means fighting for a socialist future, free from poverty, oppression and coercion.

Billionaires profit from a pandemic! 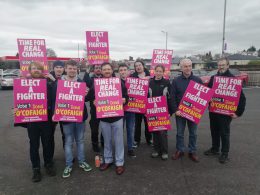 The election of Donal O’Cofaigh for CCLA in Enniskillen represents a breakthrough for anti-sectarian, working-class politics which illustrates the way forward in the years ahead. It is a breakthrough we intend to build upon