In the run up to the G8 David Cameron has done much grandstanding on the issue of corporate tax avoidance. This is not about genuinely tackling this swindle but to make the Con-Dem government appear fair as they inflict savage cuts and wage freezes on working class people.
The extent of the fraud is truly staggering.  The PCS civil service union which represents workers in tax collection has estimated tax avoidance and evasion, mostly by the super-rich, totals £120 billion each year. This is 100 times more than the £1.2 billion in benefit fraud estimated to be committed by society’s poorest. Despite this, the Tories and their friends in the tabloid media have up to now focused on exploiting the benefit fraud issue in an effort to demonise all claimants and divide working class people.
The real tax cheats are the corporations. Take Amazon.com for instance who had UK sales of £4.2 billion last year, and received more in government grants than they paid in tax, in total just £2.4 million. Likewise, by routing its profits through Ireland, Google only paid £6m in corporation tax on UK sales worth £2.7bn . That amounts to to a tax rate of just 3.2% on their enormous wealth, much less than the rate paid by the rest of us.
In fact, of the top 100 companies on the FTSE stock exchange 98 are using tax havens, with firms such as Tesco and Barclays each owning hundreds of offshore subsidiaries. This is little wonder when government after government, both Tory and New Labour, has let the very accountancy firms such as PriceWaterhouseCoopers who specialise in corporate tax avoidance effectively write the rules!
Now blaming the “complexity” of the tax system, some MP’s are using the tax avoidance scandal as a pretext to argue for more pro-big business “reforms” such as a reduction in corporation tax. A pamphlet published by the Free Enterprise Group, which was publically backed by 40 senior Tories, calls for a reduction in the corporation tax rate from the current 23% rate to just 10%!  This echo’s the demands of the parties in power in Stormont who are all calling for significant corporation tax reductions here.
This is robbery! If these companies and the super-rich who own and run them paid their tax it would pay off the deficit and pay for much, much, more besides. Instead we have the spectacle of the politicians both at Westminster and Stormont bending over backwards to yield to the demands of these corporations and their representatives, implementing attack after attack on our jobs, benefits and services.
Capitalism is an inherently corrupt system run in the interests of a tiny minority of super-rich. To boost profits big business will always find ways of avoiding paying their way. The choice is not between “responsible” and “irresponsible” capitalism as Labour Party leader Ed Milliband claimed in a recent speech on Google’s tax avoidance, but capitalism and socialism. Only by taking these companies into the public ownership under the democratic control and management of ordinary working people can we harness their immense wealth-producing power for the common good, providing jobs, free education and a decent standard of living for all.

Stop cuts to our fire service!

We must oppose these cuts which could put lives at risk and demand the necessary funding – a relative pittance – is put in place urgently. We know money can be found when it suits the political establishment, for junkets and handout to big business. It is a question of political priorities. A campaign of community protests and trade union action can win. 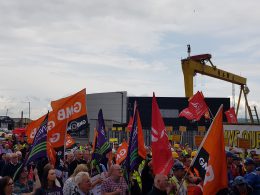