On the evening of Monday 2nd December, students at the University of Ulster’s Coleraine campus began an occupation of the Senior Common Room in opposition to plans to close the space. The Socialist spoke to Chloe Gault, a member of UUC Socialist Society and an organiser of the occupation:

The Socialist: Chloe, tell us why you’ve decided to begin this occupation and where the idea came from?

Chloe Gault: The Senior Common Room is one of the only public spaces at UUC where students and staff can relax and socialise. Almost all the facilities here are privatised. It’s an essential space for clubs and societies on campus. It also has historical importance for the students’ movement and as a space where students from across the sectarian divide come together to mix and discuss. When we heard of management’s plans to close the SCR and turn it into a ‘corporate dining room’ for the great and the good, we felt we had to act. The idea was initiated by the Poetry Society – of which I’m a member – but a wide range of students and others are involved.

TS: Obviously, you’ve timed your occupation to coincide with the staff strike today (Tuesday 3rd) against management’s derisory 1% pay offer. What’s the significance of this?

CG: At the same time as management are holding down staff pay, student services are being cut to the bone. The Student Services Budget here has been cut by 30% here while the number of full-time students has increased by 11%. As far as I’m concerned, we’re in the same fight. Attacks on staff pay hit morale and quality of life and impact on our education. We need to stand together in solidarity. We’ve developed a very close relationship with the staff. We’ve been visiting their picket lines and they’ve been coming up to support the occupation.

TS: What about other students and management? What has the reaction been like there?

CG: Most other students here understand the importance of what we’re doing and have been really positive. We’ve already got great support from other activists from further afield, through Twitter and so on, but also with some coming up to visit us – even driving up from Belfast and bringing us bags of food! Anyone who wants to come up and show solidarity is very welcome. NUS-USI (the official students’ movement in Northern Ireland) has also been very supportive.

So far, management has simply ignored us because we have the right to be in our common room 24/7. Perhaps they hope we’ll just go away – they’re wrong! We’re in this for the long-haul, until the future of the SCR is guaranteed. We’re organising a series of events like film showings, parties and even a talk by Terry Eagleton to keep the momentum going and get people talking.

TS: Do you think we need to see tactics like occupation and other forms of peaceful direct action being used more frequently by students to fight cuts, privatisation and so on?

CG: Absolutely, if management and the politicians refuse to listen any other way. We didn’t start with an occupation here – there was a petition campaign and an attempt to engage management in dialogue which they flatly ignored. That’s when we decided we needed to step the campaign up. Students and workers need to stand up and make or voices heard.

The past continues to haunt the present in Northern Ireland. In the last week of February a major…
byArchive 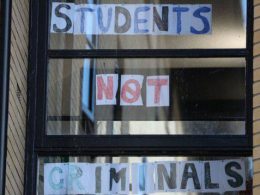