Leading anti-fracking activist Donal O’Cofaigh has challenged the Sinn Féin leadership to publicly back a commitment made by Phil Flanagan MLA. At a public meeting in Enniskillen attended by well over 100 people, Mr Flanagan said that Sinn Féin will veto plans to begin hydraulic fracturing – also known as fracking, which has been connected with earthquakes and water pollution – when they come before the Assembly Executive.

Donal O’Cofaigh said: “Mr Flanagan’s promise to the people of Fermanagh and other areas threatened with this dangerous practice is to be welcomed. He said that planning permission for fracking will come before the Assembly Executive and clearly stated that Sinn Féin will be prepared to use a petition of concern to block it if necessary. But why wait until then? If Sinn Féin’s leadership were to publicly back this statement today, the fracking multinationals would pack their bags and be gone tomorrow. I am calling on Martin McGuinness to take the threat of fracking – which is hanging over the heads of the people of Fermanagh – off the table today.”

A recent report “Challenging Racism: Ending Hate” by Richard Montague and Peter Shirlow blows apart some of the…
byArchive 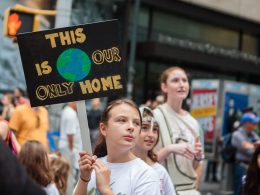 The technology and the wealth necessary to tackle climate change exist, but capitalism's incessant, myopic drive for profit above all else is a fundamental barrier to safeguarding our further. By taking society's wealth out of the hands of the super-rich elite and using it in a planned and democratic way,  we could rapidly transfer to renewable energy, creating millions of jobs in planning, constructing and maintaining the infrastructure necessary for this, and furthermore, providing electricity and other vital services for vast swathes of the world currently lacking. Environmentalists must campaign for socialist solutions to climate change – the only real solutions – and discard the half-measures of capitalism.
bySocialist Party