In 1966, Ken Loach shocked British audiences with his unflinchingly honest portrayal of poverty in the UK in Cathy Come Home. Now, fifty years on, Loach has once again put on a masterclass in socialist film making, in a film that shakes with a sort of quiet anger throughout.

In 1966, Ken Loach shocked British audiences with his unflinchingly honest portrayal of poverty in the UK in Cathy Come Home. Now, fifty years on, Loach has once again put on a masterclass in socialist film making, in a film that shakes with a sort of quiet anger throughout.

I, Daniel Blake follows the story of a joiner who, after suffering a serious heart attack, is told by his doctor he is unable to work. When a “decision maker” with no medical qualification disagrees and his Employment and Support Allowance is taken away, the protagonist is left in a cold world of arbitrary bureaucracy, designed to infuriate him into complacency, to force him to put his life at risk by returning to work. He befriends a single mother, struggling to feed her children, after she is sanctioned for arriving late to a benefits meeting through no fault of her own. The film is already being lauded by critics, particularly for a scene featuring the palpable unease of visiting a foodbank.

Cathy Come Home quickly became “the most influential hour and a half of television ever” according to one writer. Judging by the reaction of right-wing pundits and Tory politicians who have never faced poverty in their lives, the establishment is clearly worried that I, Daniel Blake could have a similar impact. Since the film’s release, it has met with criticism from the likes of benefits-slasher Iain Duncan Smith, attacking the film as “misrepresentative”.

The film not only seeks to illuminate the Tory government’s attack on the poor but also the culture of shame around the benefits system. One prospective employer accuses the title character of preferring benefits over “a hard day’s graft.” In the film, some job centre staff are supportive and sympathetic, but also victimised by a heartless system. Others are portrayed as having bought into the mind-set that benefit claimants are sponges to be harassed and coerced back to work.

It’s Time to Get Angry

Told expertly through humour and horror alike, the film has won Loach his second Palme D’Or, one of the most prestigious and universally renowned distinctions a film can get. At the heart of its unadorned style, which avoids melodrama like the plague, I, Daniel Blake is a biting indictment of attacks on the most vulnerable in our society, perpetuated by the Tory government. At a time when Theresa May’s cabinet is planning £3 billion worth of cuts to in-work benefits, surely this film’s message will strike a chord with audiences.

Loach’s film, perhaps his last, has a sort of downplayed vitality to it – an anger, a rage. This may turn off some audiences. However, as Loach himself recently put it, “If you’re not angry, what kind of person are you?” In I, Daniel Blake, Loach seems to be saying we cannot wait by for this cruel trend to pass whilst people all over the UK are being decimated by Tory ideology. The time to be angry is now. 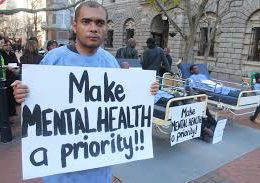 Mental health services continue to be so overwhelmed by demand that people seeking help routinely face long waiting lists to access the treatment they need.