Resist was a very successful event organised by Socialist Youth and hosted in Queens Student Union. The event drew crowds from all members of the community who where intrigued by the many discussions being being held throughout the two days. It is estimated that about one hundred and fifty people attended the event over the two days.

There were numerous debates held over the course of the event, one of which was a rally titled “their system isn’t working, the fight for a socialist alternative” which attracted a crowd of around forty people. Speaking at this debate was Sean Burns who is a member of Socialist Youth, Paul Murphy who is a former MEP and candidate in the coming Dublin West bye-election and Kayllan who is a Socialist Alternative activist in the Untied States of America, she spoke via web link to the packed room.

Another debate focused on racism and was titled “from Belfast to Greece keep the racists of our streets”. Many attended this debate and one of the speakers was Paddy Meehan who is a Socialist Party activist and a anti-racist activist in South Belfast. The other speaker was Alexandros Payiatsos who is Greek anti-fascist activist, he spoke via web link to the audience on the issues he was experiencing in Greece.

One of the big debates held was “is there a solution to the Israel/Palestine conflict?” where again Paul Murphy spoke about his experiences of being on a Gaza Freedom Flotilla and also his experience of being imprisoned by the Israeli state for his participation on the Flotilla, the other speeker was a representative from Maavak Sozialisti which is a socialist organisation in Israel and Palestine which fights against the occupation and campaigns for the unity of the working class of both Israel and Palestine. This was a very popular debate due to recent events and attracted a crowd of around sixty people, many of which made contributions and asked relevant questions.

Another attractive debate was “how can we rid society of sectarianism?”. Speaking at this debate was Daniel Waldron who is a Socialist Party activist in Belfast, Sean Fearon who is a member of Sinn Fein and Johnny McCarthy who is a NI21 councillor based in Lisburn. This debate was very lively with many questions being directed at mainly Sean but also to the other speakers. To round of the event there was a showing of the highly rated documentary, Gaslands 2. The focus of this documentary was on fracking, which is extremely relevant in Northern Ireland at the moment, this film showing drew a crowd of around thirty people who were interested in the issue of fracking. 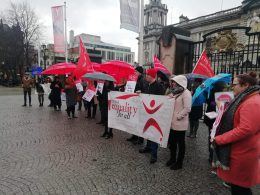 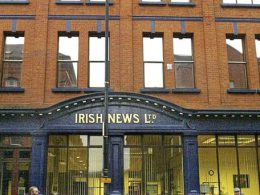 Journalists across multiple newspapers in Northern Ireland have received threats from both loyalist paramilitaries and ‘dissident’ republicans. The threats against journalists working for the Belfast Telegraph are believed to originate from the breakaway South-East Antrim UDA. Female journalists in particular have also been targets of misogynistic threats.

Today, Socialist Party members at Queen’s University have submitted a petition to the Students’ Union with the necessary number of signatures…
byArchive
Read More