“They’re all the same”, “They’re only in it for themselves”, “What have they actually done for us?” – If you’re sick and tired with all the main political parties here, you’re far from alone. In a Belfast Telegraph poll, two-thirds of those who expressed an opinion compared Stormont’s performance negatively with direct rule from Westminster!

This should come as no surprise. The promised ‘peace dividend’ now seems like a cruel joke from the point of view of working class communities. The Assembly Executive has simply acted as a rubber stamp for the Westminster government’s austerity policies, slavishly cutting pay, jobs and services to pay for the bankers’ bailout.

These policies have left us with mounting poverty and inequality, mass youth unemployment and a health service at breaking point. And there’s no end in sight! Despite the talk of ‘economic recovery’ (for the rich, at least), Finance Minister Simon Hamilton has made it clear that the Assembly will be implementing deeper and deeper cuts in the coming years. It’s clear that – once the elections are out of the way – the politicians will agree to implement the so-called ‘welfare reform’ agenda, leaving hundreds of thousands of people here worse off.

The politicians, however, haven’t shared in this pain. In January – just months after awarding themselves a £5,000 pay-rise – the Assembly politicians had the brass neck to vote through pension cuts for 250,000 public sector workers. While working people and those on benefits are struggling to make ends meet, they are milking expenses and jetting off on junkets around the world at our expense.

While they’re happy to work together in cutting A&Es, closing schools and privatising services, both unionist and nationalist politicians cynically engage in sabre-rattling around issues like flags, parades and the past. Facing mounting anger and opposition, both sides hope that beating the sectarian drum will keep the communities in line. Politicians who rely on sectarian division are incapable of overcoming it.

Sixteen years after the Good Friday Agreement, our society remains deeply divided. 65% of young people do not believe peace has been achieved while over 40% believe they will see a return to all-out violence in their lifetimes. That is a shocking indictment of the sectarian parties. The ratcheting up of tensions by our ‘respectable’ politicians – along with the hopelessness and alienation caused by their economic policies – is creating an environment in which forces determined to drag us back into conflict can grow. The evidence of this has been clearly visible on our streets over the last year.

The Socialist Party is fielding candidates in the upcoming local elections on May 22nd to provide a working class alternative to austerity and sectarian division and allow people to express their disgust at the main parties. Belfast City Hospital A&E campaigner Paddy Meehan will be standing in the Botanic area of south Belfast while trade union activist Tommy Black will be contesting Titanic in the east of the city (see page 2 for more info). Meanwhile, Socialist Party member Donal O’Cofaigh will be seeking election as an anti-fracking candidate in Enniskillen (see back page for more info).

Unfortunately, the vast majority of people will not have a real alternative on the ballot paper. This election will be just another sectarian headcount. It is likely that – when those not registered are taken into account – the majority will simply stay at home, not seeing anyone worth voting for. This situation cannot be allowed to continue. The Socialist Party will use our campaign to call for the building of a new, mass party based on trade unionists, genuine community activists, environmentalists and those fighting against sexism, racism and homophobia. This would be an important step forward in the fight for a future free for poverty and division.

Trade unions must stand up to Stormont's austerity

By Greg Lilley Monday 19th September saw the start of the Jobstown show trials. In the Children’s Court…
byArchive 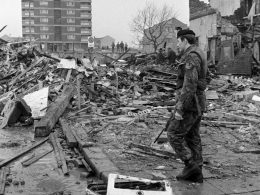 Socialists have no confidence in the capacity of the sectarian forces and the state to subject their role in the troubles to real scrutiny. We do however have a confidence in working class people to expose the truth and expose these forces to real scrutiny. This could means some form of wide-ranging enquiry into the troubles, which would not be in the hands of the state or establishment parties but made up of respected trade unionists and those with a record of campaigning on these issues from the stand point of ordinary people, including human rights groups.
bySocialist Party