South Belfast anti-cuts campaigner Paddy Meehan has called on “the Health Minister, the Assembly Executive and the Belfast Health Trust to call an emergency meeting to take the appropriate action to re-open the vacant A&E unit at the City Hospital.”

“The recent emergency in the Royal Victoria Hospital has proved that cuts in hours at Lagan Valley and the closure of Belfast City Hospital A&E is putting enormous pressure on staff at the Royal. The figures show that the number of people waiting more than 12 hours for treatment has doubled.

“The decision to close the City A&E was sold as a temporary measure due to a lack of consultants. The truth, as was pointed out at the time, was that this was not about being unable to hire consultants, this is simply about cutting our health service to the bone. These health cuts are putting lives at risk.

“The A&E crisis is twofold – there aren’t enough staff and there aren’t enough beds. This can begin to be solved by re-opening the City Hospital A&E and properly resourcing it. All that is missing is the political will to do so. The politicians in Stormont cannot claim they have not the money after wasting £82million on the G8 summit. We will be encouraging the local community, trade unionists, workers and their families to challenge the politicians in the run-up to the elections in May.” 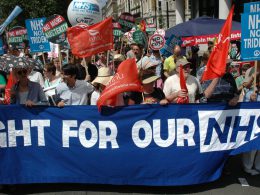