We the undersigned, left-wing Members of the European Parliament (members of GUE/NGL) would like to extend our solidarity to those campaigning and protesting against the G8 in Fermanagh, Northern Ireland, including the events organised by the trade union movement and the ‘G8 Not Welcome’ campaign.

The G8 leaders represent the interest of the super-rich and are made up of right wing governments which are attacking the living standards of ordinary people. They are determined to make ordinary people pay for a crisis which they did not create in order to fund the bail-out of the bankers and speculators. Their austerity agenda is killing the economy and has created mass unemployment across the globe, especially amongst young people. While the super-rich continue to get richer, billions of people on our planet subsist on less than $2 a day.

These protests continue a long history of protest and resistance against the G8’s capitalist agenda. Not since its 2001 meeting in Genoa, which saw 200,000 protesters take to the streets and the police’s killing of Carlo Giuliani has the G8 dared to meet in an area accessible to protesters. Nevertheless, however remote a location they choose, they are still met by protesters opposed to austerity, war and environmental destruction.

The visit of the G8 to local communities across the world has provided no long term economic benefit to those communities and has turned these local areas into militarised zones in the run up to these summits, causing huge disruption to the lives of ordinary people. Their visit to Fermanagh seems to be no different, with thousands of police officers and army being brought into the area. Water cannons are on stand-by, together with make shift prisons for protesters and the purchasing of drone spy-planes, which has been authorised by the local Policing Board.

We oppose the conscious attempt by the police, right wing politicians and the media to intimidate people from exercising their right to protest against the G8 and to smear the campaign by labelling those who oppose the G8 as violent thugs. Those involved in violence will be inside the G8 summit!

We hope the protests both in Belfast and Fermanagh are a success and play a role in strengthening the fight against austerity and war both in Ireland and across the world. 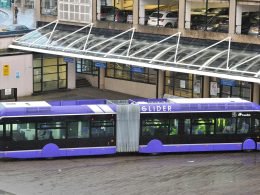 The announcement that Translink is on the brink of collapse has brought uncertainty to its more than 4,000-strong workforce. With a deficit of £29 million, the further cutting of already poor transport services has the potential to leave many parts of Northern Ireland, particularly rural and working-class inner city areas, without public transport, potentially having a devastating impact on the day-to-day lives of ordinary people.

Minister for Culture, Arts and Leisure Carál Ní Chuilín has cut the budget of the Arts Council by…
byArchive

The proposed cuts to St. Mary’s College – which threaten to force it to close after over 100…
byArchive