We need fighting unions to defend jobs & conditions Throughout Europe, governments are implementing viciousausterity programmes, inflicting enormous damage to people’s living standards and causing a social crisis in one country after another. Suicide rates are growing throughout Europe as unemployment soars to new records.

The effects of austerity can also be seen across Northern Ireland.Town and city centres are on their knees as a result of people cutting back on spending. The massive cuts to public services is ripping the heart out of the economy here, yet ALL the parties in the Assembly Executive are determined to implement £4BILLION austerity programme of cuts over the next few years – this is economic suicide. The Socialist Party, together with others, is building the Stop the Cuts Campaign to unite and organise people to fight all cuts.

Working class people cannot afford to allow the sectarian Assembly parties attempt to prop up a failed capitalist system which only offers mass unemployment and social crisis. Socialist policies are urgently needed to put people back to work – not temporary, low paid jobs, but decent jobs with decent pay- and put in place an emergency investment programme to give young people a real future. If you agree, then join the Socialist Party today and help build the socialist alternative!

The magnificent show of strength by public sector workerson 30 November saw two million on strike against attacks on pensions and cuts of the ConDem government and locally, their partners in crime in the Northern Ireland Assembly. It proved that workers are willing to fight if a real lead is given by the leadership of the trade unions, and it showed there is huge support amongst people in general for the idea of mass action to stop the cuts.

On 10 May, tens of thousands of workers across severalunions will resume strike action. Civil service, health and education workers are continuing the battle to protect pensions. Most workers agree that the fight should continue, but unfortunately the leadership of several trade unions have refused to give any leadership and have ignored calls to join the 10 May strike. In particular the leadership of Unison has decided to give up and leave the Tory/Lib-Dem government savage members’ pensions, even though members have recently rejected the latest offer in an official ballot.

If people in positions of power in the trade unions are not prepared to fight on behalf of workers who are feeling the pain of cuts, they should stand aside and allow workers to electrepresentatives to give a fighting lead. A number of unions,including NIPSA and PCS, are attempting to build a ‘coalition of the willing’ to co-ordinate action between unions which are prepared to fight the cuts. Members of all unions need to campaign within their unions for a united 1 day public sector strike, linking up with Left activists in other unions.

In the face of a juggernaut of cuts from the ConDem coalitionmany working-class people turned out to vote Labour in the local elections in Britain. Most will have done so without illusions that Labour genuinely represents their interests. Instead – with no mass alternative posed – they voted for the ‘lesser evil’. Labour were swept to victory in the elections on the back of hatred forthe Tories and LibDems, not enthusiasm for their own party.

And why would ordinary people be jubilant about a return of Labour? Their record in power was one of privatisation, cuts, corruption and wars for profit. They did not lift a finger to repeal Thatcher’s anti-union laws. Now in opposition, Milliband will not commit to reversing a single ConDem cut and attacked workers involved in the tremendous strike on November 30th. Labour bailed out the bankers and are committed to making workers and young people pay for the capitalist crisis. And yet the trade unions continue to fund this anti-worker, pro-capitalist party to the tune of millions every year! The Irish Labour Party is of exactlythe same character, slavishly implementing the austerity demanded by the EU and IMF in the South.

The Assembly parties – just like Labour at council level in Britain – try to wash their hands of responsibility for cuts. They say theirhands are tied and Westminster holds the purse strings. If they can’t do anything for the people they are meant to represent, what is their function? If the Assembly Executive were to refuse to implement cuts and demand the necessary funding for public services, they would get a huge response – not just here but in Britain and further afield. It could trigger a mass movement that could topple the Tories and Liberals from power. In reality, all the main parties are wedded to cuts and privatisation. They have no strategy to deliver jobs and meet people’s needs. They simply want to manage their sectarian carve-up of Northern Ireland.

The potential for new parties that fight for workers and young people has been concretely demonstrated. George Galloway’s stunning victory in Bradford West was a huge blow to Labour and showed that workers and young people can be won to a radical alternative. In the Liverpool mayoral elections, Tony Mulhearn – one of the 47 Liverpool councillors who took on Thatcher in the 80s, now a member of the Socialist Party – won 5% of the vote, despite huge media bias towards the Labour candidate.The Socialist Party and United Left Alliance in the South have five TDs and one MEP and have used their positions to help build mass opposition to Fine Gael and Labour’s household tax. Unions in Britain should break from Labour and use their resources and authority to help launch new parties which fight alongside trade unionists, the unemployed and young people and provide a real alternative to the cuts consensus.

The history of the Northern Ireland Labour Party – despite its weaknesses – shows that sectarianism does not inevitably dominate politics here and that class politics can unite Catholic and Protestant workers. The trade union movement should now take concrete steps in this direction. The collapse in turnout at the Assembly elections last year reflects a growing disillusionment with the main parties. Many of these people could be drawn behind a new, anti-sectarian party of struggle, which would shake the political establishment here to its foundations. The building of such a party would be a powerful weapon in the fight to defend and extend the gains which working-class people have won. 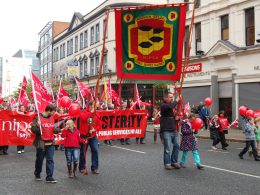 Forty years ago, on Sunday 30 January 1972, members of the Parachute Regiment (the Paras) shot 27 unarmed civilians, (14 of whom died) on a protest through the barricaded Bogside area of Derry. Eight of those killed were aged under 22. Six of them were 17 year olds. 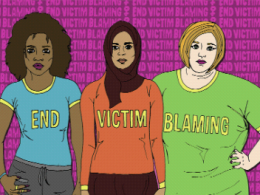