In the quest for truth, however, we believe it is necessary to look to the forces which in the course of the Troubles can genuinely lay claim to standing against sectarian division and violence – that is the labour and trade union movement, particularly its rank-and-file activists. It is this force today, alongside a new generation of young people who want to fight for equality, that can provide the basis for a different future. Part of their task will be to bring to light the reality of the Troubles and seek to provide justice for its victims. “Imprisoning journalists who write about inconvenient truths is an unconscionable blow to press freedom – and indeed everyone’s freedom.” This is what British foreign secretary Jeremy Hunt tweeted before his visit to Burma at the start of September. However, days before, journalists Trevor Birney and Barry McCaffrey were arrested in Northern Ireland by detectives from Durham Constabulary, supported by officers from the PSNI.

These journalists were arrested over the suspected theft of confidential documents relating to the 1994 Loughinisland massacre in relation to their documentary No Stone Unturned. As a statement from the National Union of Journalists correctly put it, “The protection of journalistic sources of confidential information is of vital importance and journalists must be free to operate in the public interest without police interference. These journalists are entitled to claim journalistic privilege and to seek the protection of the legal system if there is any attempt to force them to reveal sources.”

No Stone Unturned shows the lengths to which the RUC went to cover up the involvement of their informers in the Loughinisland massacre, where the UVF killed innocent people as they watched a World Cup game. The film names the main suspects, one of whom was a UDR soldier and the other a police informer. One ex-investigator interviewed says there was “a forensic goldmine”. As director Alex Gibney put it, the cover-up “was staggering in terms of its breadth and audacity.”  A remarkable amount of evidence was destroyed, including the transcripts of the suspect interviews and the car which the gunmen used in the attack.

Recent reports, books and documentaries by investigative journalists have also exposed the role of the state during the Troubles, yet the Tories maintain this is nothing but a “pernicious counter-narrative”, as Theresa Villiers put it. These arrests are aimed at having a chilling effect on investigative journalism generally.

The important role investigative journalism can play in exposing the reality of atrocities committed during the Troubles was once again seen in the Channel 4 documentary on the Ballymurphy massacre. Through interviews with eye-witnesses and relatives of those who were killed, reconstructions and by using extracts of official documents, the documentary builds a picture of the senseless killing of 11 people by state forces in the Catholic working-class community.

Despite the claims of the British state that it was a neutral arbitrator in the Troubles, the events of Ballymurphy, Loughinland and elsewhere are testament to the reality that, alongside the sectarian paramilitaries, the state was an important actor in the Troubles. Today, the various sectarian parties push their own narrative on this dark period. Attacks like that on the memorial at Narrow Water – where 18 British soldiers were killed in 1979 – and Kingsmill – where the IRA massacred eleven Protestant workers – are utterly reprehensible and will only serve to fan the flames of sectarian division.

In many ways, the unresolved legacy of the Troubles continues to have an important effect on society and politics in Northern Ireland. Yet the contending forces are unable to provide truth or justice for its many victims. How can the British state be trusted to provide justice to the victims of massacres and collusion when they continue deny their involvement and have been prepared to prosecute journalists who expose the truths ? How can the DUP provide any truth or justice to the families of the Loughinisland victims? DUP leaders were central figures in the founding of Ulster Resistance, an organisation that collaborated with the UVF and UDA to import guns from South Africa to Northern Ireland, one of which was used in this atrocity.

While the establishment kick the can down the road, failing to deal with these issues, it is the families and victims who suffer. Socialists support measures that can bring out the truth for the families and victims of the Troubles. We believe a real accounting with the past would provide an assessment of the role played by the contending forces during the conflict. Socialists support significant funding for inquests and funding for those injured and traumatised during the Troubles. We stand completely opposed to prosecutions of those who seek to bring the truth into the open and call for state documents relating to the Troubles to be released.

In the quest for truth, however, we believe it is necessary to look to the forces which in the course of the Troubles can genuinely lay claim to standing against sectarian division and violence – that is the labour and trade union movement, particularly its rank-and-file activists. It is this force today, alongside a new generation of young people who want to fight for equality, that can provide the basis for a different future. Part of their task will be to bring to light the reality of the Troubles and seek to provide justice for its victims. 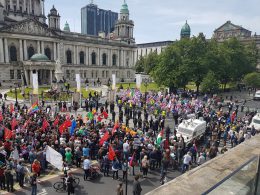 Campaign Against Fracking heats up Can you explain what fracking is? Fracking (or high pressure hydraulic fracturing) was…
byArchive
Read More