For the past decade, zero hour contracts and low pay are the norm for huge sections of young workers as the employers try to squeeze the maximum amount of profit out of their workforce for the least amount of cost. Union recognition in precarious sectors such as hospitality is non-existent while bullying and harassment of workers is widesprea. It is also often normalised as employers seek to corral their staff into compliance. Trade union membership is low, with just 6.3% of under 30s on low and median incomes in trade unions.

The growth in these kinds of sectors poses serious challenges to the union movement. The employers wield a huge amount of power over workers in these sectors. When your hours are dictated week to week, and you are reliant on tips to make up your income – organising against your employer can seem like a monolithic task.

Fly-by-night agreements with employers such as those that SIPTU has engaged in, are tenuous at best. While on the surface appearing to have positive benefits for workers, too often they are utilised by employers to give themselves the cover of being “fair” while continuing with their rotten practices. Unless these agreements are backed up with organising on the ground, even the limited gains won for workers can be wrested away when they become an inconvenience for the bosses’ profit margins.
TGI Fridays and the #McStrike have pointed the way forward. Facing down the employers, utilising the most effective weapon at our disposal – the ability to strike – they wrested concessions that improved the lives and working conditions in those workplaces. By organsing on the ground they built an collective strength that will last and can be built upon for the future.

The idea that was prevalent in the trade union officialdom that it was impossible to organise young and precarious workers either because they are “apathetic” or the bosses were too strong has been disproven by these struggles. The power that workers have – even those in difficult conditions – far outweighs the power of the bosses. As illustrated in TGIs and McDonalds, fighting collectively and hitting the profit margins of the bosses wins results.

Measures proposed by the Trade Union Congress (TUC) such as the development of the “worksmart” app falls far short of what is necessary. In reality this is a form of outsourcing i.e. substituting an app that provides “career advice” for real life organsing. Utilising social media platforms is important in terms of building a profile for the union and assisting in practical organisation such as arranging meetings or protests but they should be used as an aide to organsing not a substitute.

The trade union movement must connect itself to the aspirations and demands of this section of young and precarious workers. This means fighting on more than just the immediate “bread and butter” issues. Unite Hospitality in Belfast, which Socialist Party members are central to, has spearheaded the way forward. Adopting an organsing approach, winning gains on the ground but also crucially taking a political approach, connecting to the demands and aspirations of young people to be free from a society where inequality, oppression and division dominate is key to breaking into precarious sectors. 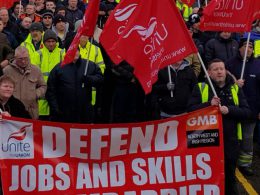