Local politicians could not hide from this nor brush off the pressure lightly. They were forced to address the dispute immediately when Stormont was restored and grant concessions to the workers. Over the course of the dispute, these politicians cynically visited picket lines and expressed support for the strike, despite the fact it was they broke parity in the first place. Without the campaign of industrial action, both the DUP and Sinn Féin would have been content to let this issue lie dormant.

The offer of pay parity with English staff and some minor measures to tackle staff shortages represents an important step forward. Unison, Unite and the Royal College of Nursing have recommended the deal to their members and ballots are now under way. But more could be won – parity with Scottish staff, the highest paid in the UK, for example – if the campaign was maintained.

The fact that staff working only to the terms of their contract provoked a crisis of cancelled appointments is evidence enough of the dangerous levels of under-staffing. Restoring safe staffing levels means continuing the fight for a fully-public NHS, funded to meet need. The groundswell of public support that fell in behind the strikers should be built upon to launch a more general campaign to save the NHS and overturn the privatisation and cuts that have been inflicted upon it.

While quickly moving to settle the health dispute, the politicians have chosen to ignore the ongoing dispute in the civil service. The campaign of industrial action for fair pay has so far been ignored by the new Executive. This is not accidental. New Decade, New Approach proposes further “reform” in the civil service, which of course means further attempt to destroy jobs in the public sector in order to “rebalance” the economy. To grant concessions on pay would undermine the Executive’s objective of cutting away at the public sector.

With the restoration of the institutions, a clear target is now in sight for civil service workers. A campaign of further action is necessary to force Conor Murphy and the Northern Ireland Executive to provide a pay-rise for all public servants. The granting of concessions to health workers has proven the buck stops with the Executive, and that they are susceptible to pressure. They can no longer plead that this issue is out of their hands.

As we go to press, university staff are launching into a new round of strike action around the ‘Four Fights’ – tackling pension cuts, workload, casualisation and the gender pay gap. This is a significant battle that takes on the neo-liberal model of higher education. In order to be successful, UCU members must learn the lessons of the health workers’ dispute. Escalating their action with more well‐prepared strike dates, a marking boycott and challenging the local politicians by mobilising the support of students and the broader general public.

The new Executive will not be capable of addressing workers’ concerns fundamentally. The new agreement, despite some window dressing, is at its core based upon the same neo-liberal model as has dominated at Stormont in the past. The trade union movement should weave together the struggles across every sector and co-ordinate action, as was the case with the public sector strikes in 2013, to take on the Assembly and the bosses. Such mobilisations could shatter the neo-liberal agenda of Stormont and pose the possibility of launching an offensive struggle, fighting for a society based upon people’s needs, not profit. 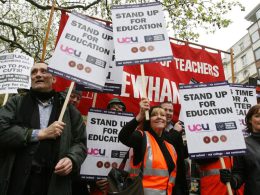