Our NHS and provision of health care services are imploding. Chaos now reigns root and branch throughout all the areas of the health service as each department struggles to implement budgetary cuts demanded by the Assembly Executive.

At this moment in time, our NHS and provision of health care services are imploding. Chaos now reigns root and branch throughout all the areas of the health service as each department struggles to implement budgetary cuts demanded by the Assembly Executive. The Health Board has been forced to reveal surgical waiting lists are to get “significantly worse”. Patients waiting more than 26 weeks on trauma/orthopaedic waiting lists have increased to 4,674 in March 2015, up 75% in the last two years. Funding for surgical waiting lists has been cut from £107 million to £27 million! The consultation to close 10 publicly funded residential homes across the North is becoming a very public issue with local campaigns beginning to be formed against their closure.

Senior Health Trust management have been instructed by the Assembly Executive that further savage budget cuts of millions of pounds must be made by April 2016. “Savings” plans based on the Donaldson Report were presented to the Health Board by Trust management. These plans would have resulted in a doomsday scenario of hospital closures, thousands of further jobs gone and the dismantlement of essential services across the whole of Northern Ireland.

The politically explosive nature of these plans forced the Assembly Executive to temporarily reject them, demanding that management come up with new “savings” plans, but with same level of cuts! Health service unions are now reporting an overwhelming number of deep structural and Organisational cuts to care provision and terms and conditions across all departments that will devastate all essential services.

New “saving plans” has seen increased attacks on staff with more pressure to increase their workload to unachievable levels. A Voluntary Exit Scheme has been introduced in health alongside draconian attendance management measures to maintain a 1% sickness target. This has seen staff undergoing disciplinary proceedings for short periods of genuine illness as a means to cut staffing levels.

Privatisation on the agenda

These wholesale cuts, closures and attacks on our NHS are not about “modernisation, service provision or the needs of our community”, as the Assembly Executive would have us believe. The proposals will see a complete reshaping of our health service towards the private sector.

Sickeningly, the central component of the Assembly’s agenda is to create a market for companies like Virgin, Tesco and 3fivetwo Group to make money when you are most vulnerable. If you cannot afford it, that’s too bad!

Working people and communities instinctively value the principles our health service – publicly owned and free at the point of use. Local campaigns and industrial action around cuts in jobs and services show communities and workers will fight time and again when a lead is given against Assembly’s health cuts. It is essential now the trade union movement develops a plan to lead a real fightback to save our health service.

Greece and the latest phase of the EU crisis 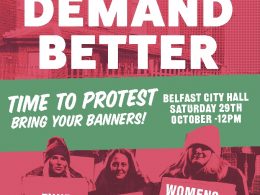