The Socialist Party calls on the people of Fermanagh & South Tyrone to vote for Caroline Wheeler – independent candidate, standing on labour and trade union policies – in the general election on Thursday 12th December. Caroline has a proven track record as a fighter for working-class people from all communities.

Caroline has important experience as a workplace trade union representative. She is a member of Fermanagh Council of Trade Unions and Unite the Union’s Irish Executive Committee. She has been a central activist with Fermanagh Save Our Services, organising crucial opposition to health cuts across the county and farther afield, which has helped defend services at the South-West Acute Hospital.

As a carer for her disabled son, Caroline had to fight a battle with health management to secure an adequate care package to meet his needs. She decided to use this experience to assist families in similar situations, helping to launch the South-West Carers’ Forum. Today, she is also playing a leading role in the campaign to secure justice for survivors of historical child sex abuse in Fermanagh.

What Caroline stands for

Caroline is a member of the Labour Party but cannot stand as an official Labour candidate because of the ongoing opposition of the central leadership to standing in elections in Northern Ireland. However, she is backed by the party locally and supports Jeremy Corbyn’s programme of left, anti-austerity policies.

These policies include scrapping Universal Credit (which has left many people locally reliant on food banks), a £10/hour minimum wage, reinstatement of NHS student bursaries, a ban on zero-hour contracts, and scrapping anti-union laws. Caroline wants to see investment in Sure Start schemes and the development of high-quality, integrated and comprehensive education here.

She supports a ban on fracking – which again threatens communities in Fermanagh – and a Green New Deal, with investment in renewable energy and public transport, creating decent jobs. Caroline backs Corbyn’s plans to re-nationalise key sectors such as energy, water and the postal service. She supports the right to choose and, flowing from its decriminalisation, wants to see abortion made accessible on the NHS locally.

On Brexit, Caroline backs Labour’s plan to negotiate a new deal with the EU which safeguards the interests of working-class people and prevents hard borders, which would then be put to the electorate in a referendum, alongside the option of remaining in the EU.

Send a message to the main parties

Caroline Wheeler offers the voters of Fermanagh & South Tyrone a real alternative to the dead-end of Orange and Green politics and the pro-cuts, pro-privatisation consensus. She stands in the area’s long tradition of anti-sectarian, labour politics.

It is unfortunate that similar candidates are not on offer across the North in this election, particularly given the developing struggles of workers and young people from across the sectarian divide, standing together to fight back against poverty pay, attacks on workers’ rights, environmental destruction and so on. There is a growing desire for fundamental change and an urgency in building a socialist alternative which can challenge poverty, austerity and division. The Socialist Party will continue to work positively with others in the labour movement to attempt to build that voice for the working class in the next period.

In that context, people in Fermanagh & South Tyrone have a unique opportunity in this election. A strong vote for Caroline Wheeler will send a message to the main parties that people are fed up with sectarian bickering, austerity and the race to the bottom in pay and conditions. It will also develop momentum behind the campaign to build a mass anti-sectarian, working-class party. We urge voters to give her their support on 12th December. 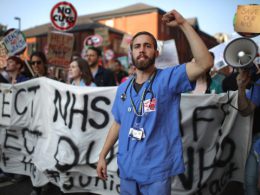 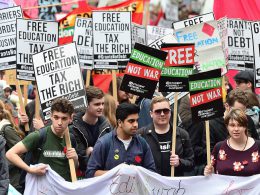